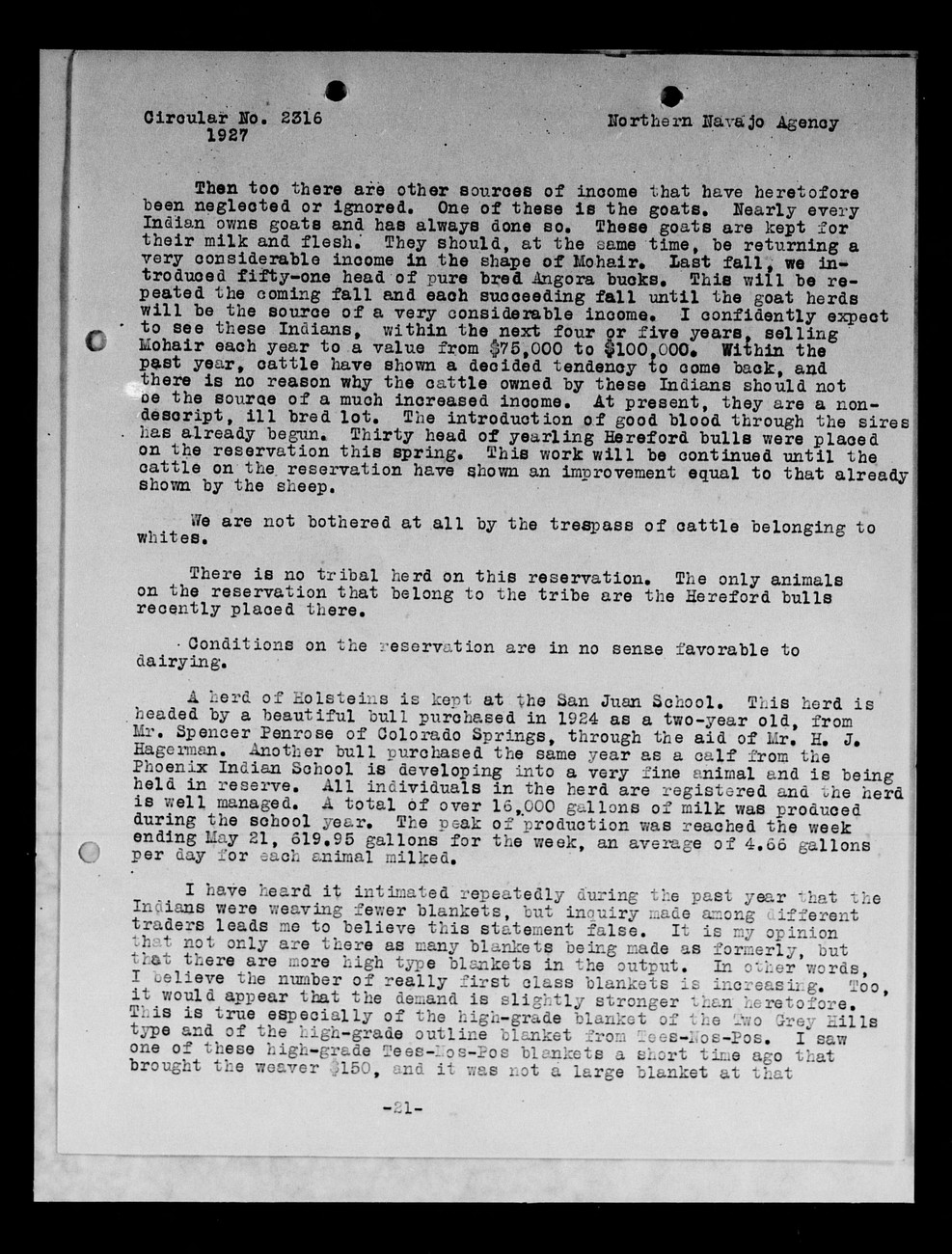 Can you help improve this?
Ciroular No. 2316 1927 Northern Nava jo Agenoy Then too there are other sources of income that have heretofore been neglected or ignored. One of these is the goats. Nearly every Indian owns goats and has always done 80. These goats are kept for their milk and flesh. They should, at the same time, be returning a very considerable income in the shape of Mohair. Last fall, we in troduced fifty- one head of pure bred Angora bucks. This will be re peated the coming fall and each succeeding fall until the goat herds will be the source of a very considerable income. I confidently expect to see these Indians, within the next four or five years, selling Mohair each year to a value from$ 75, 000 to$ 100, 000. Within the past year, cattle have shown a decided tendency to come back, and there is no reason why the cattle owned by these Indians should not de the sourge of a much increased income. At present, they are a non descript, ill bred lot. The introduction of good blood through the sires has already begun. Thirty head of yearling Hereford bulls were placed on the reservation this spring. This work will be continued until the cattle on the reservation have shown an improvement equal to that already shown by the sheep. We are not bothered at all by the trespass of cattle belonging to whites. There is no tribal he rd on this reservation. The only animals on the reservation that belong to the tribe are the Hereford bulls recently placed there. · Conditions on the reservation are in no sense favorable to dairying. A herd of Holsteins is kept at the San Juan School. This herd is headed by a beautiful bull purchased in 1924 as a two- year old, from Mr. Spencer Penrose of Colorado Springs, through the aid of Mr. H. J. Hagerman. Another bull purchased the same year as a calf from the Phoenix Indian School is developing into a very fine animal and is being held in reserve, All individuals in the herd are registered and the nera is well managed. A total of over 16, 000 gallons of milk was produced during the school year. The peak of production was reached the week ending May 21, 619. 95 gallons for the week, an average of 4. 66 gallons per day for each animal milkea. I have heard it intimated repeatedly during the past year that the Indians were weaving fewer blankets, but inquiry made among different traders leads me to believe this statement false. It is my opinion that not only are there as many blankets being made as formerly, but that there are more high type blankets in the output. In other words, I believe the nuber of really first class blankets is increasing. Too, it would appear that the demand is slightly stronger than he retofore, This is true especially of the high- grade blanket of the Iwo Grey Hills type and of the high- grade outline blanket from lees- los- Pos. I saw one of these high- grade Tees- LOS- Pos blankets a short time ago that brought the weaver$ 150, and it was not a large blanket at that P. H - 21