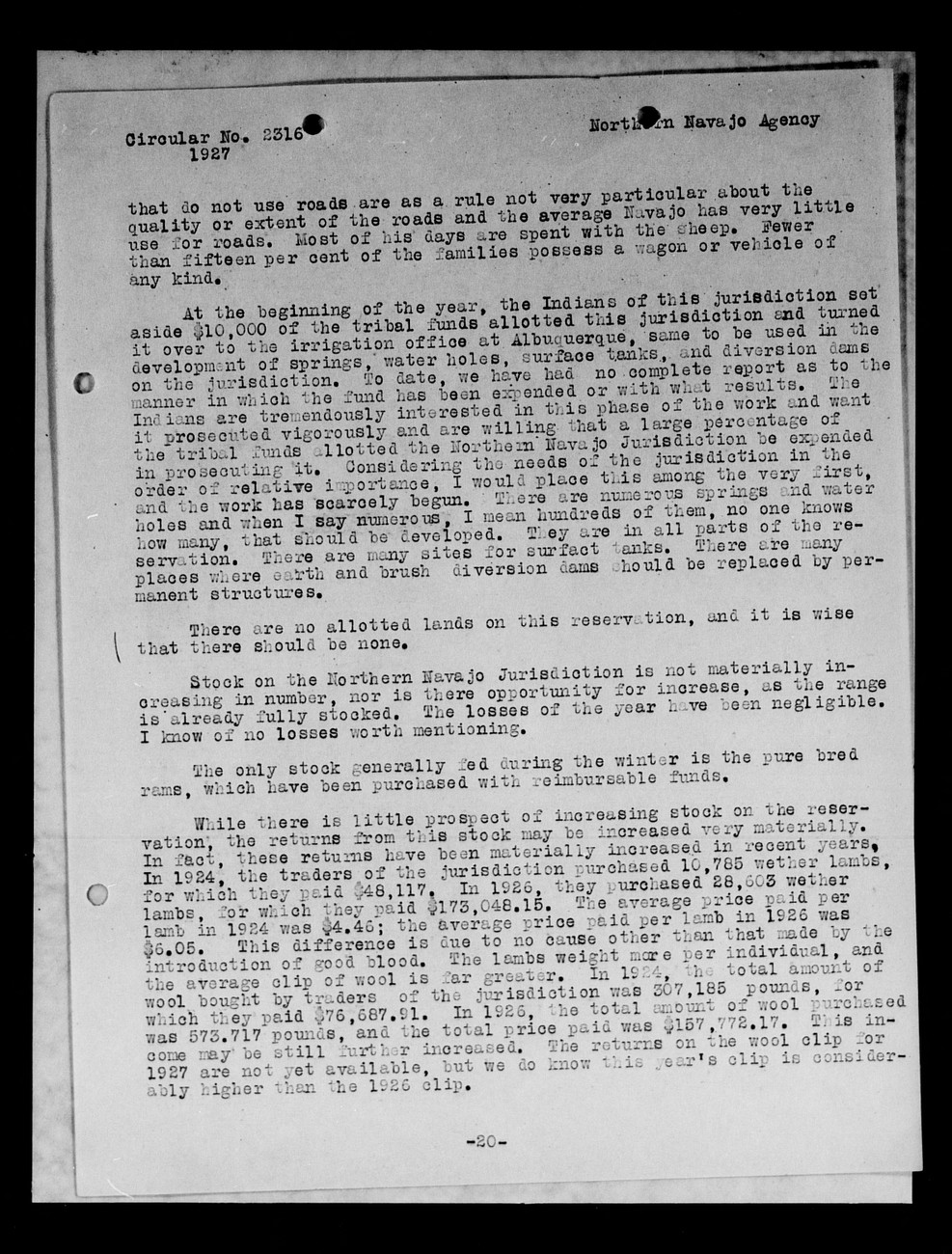 Can you help improve this?
Nortkin Nava jo Agency Circular No. 2316 1927 that do not use roads are as a rule not very particular about the quality or extent of the roads and the average Navajo has very little use for roads. Most of his days are spent with the sheep. Fewer than fifteen percent of the families possess a wagon or vehicle of any kind. At the beginning of the year, the Indians of this jurisdiction set aside$ 10, 000 of the tribal funds allotted this jurisdiction and turned it over to the irrigation office at Albuquerque, same to be used in the development of springs, water holes, surface tanks, and diversion dans on the jurisdiction. To date, we have had no complete report as to the manner in which the fund has been expended or with what results, The Indians are tremendously interested in this phase of the work and want it prosecuted vigorously and are willing that a large percentage of the tribal funds allotted the Northein Nava jo Jurisdiction be expended in prosecuting it. Considering the needs of the jurisdiction in the order of relative importance, I would place this among the very first, and the work has scarcely begun. There are numerous springs and water holes and when I say numero us, I mean hundreds of them, no one knows how many, that should be developed. They are in all parts of the re servation. There are many sites for sur fact tanks. There are many places where earth and brush diversion dams should be replaced by per manent structures. 200 mm vue work has scarcely begun. There are no allotted lands on this reservation, and it is wise that there should be none. Stock on the Northern Nava jo Jurisdiction is not materially in creasing in number, nor is there opportunity for increase, as the range is already fully stocked. The losses of the year have been negligible. I know of no losses worth mentioning. The only stock generally fed during the winter is the pure brea rams, which have been purchased with reimbursable funds. While there is little prospect of increasing stock on the reser vation, the returns from this stock may be increased very materially. In fact, these returns have been materially increased in recent years, In 1924, the traders of the jurisdiction purchased 10, 785 wether lambs, for which they paid$ 48, 117. In 1926, they purchased 28, 603 wether lambs, for which they paid$ 173, 048. 15. The average price paid per 1 amb in 1924 was$ 4, 46; the average price paid per lamb in 1926 was $ 6. 05. This difference is due to no cause other than that made by the introduction of good blood. The lambs weight mor e per individual, and the average clip of wool is tar greater. In 1924, the total amount of wool bought by traders of the jurisdiction was 307, 185 pounds, for which they paid$ 76, 687. 91. In 1926, the total amount of wool purchased was 573. 717 pounds, and the total price paid was$ 157, 772, 197, mis in come may be still further increased. The returns on the wool clip for 1927 are not yet available, but we do linov this year' s clip is consider ably higher than the 1926 clip. - 20