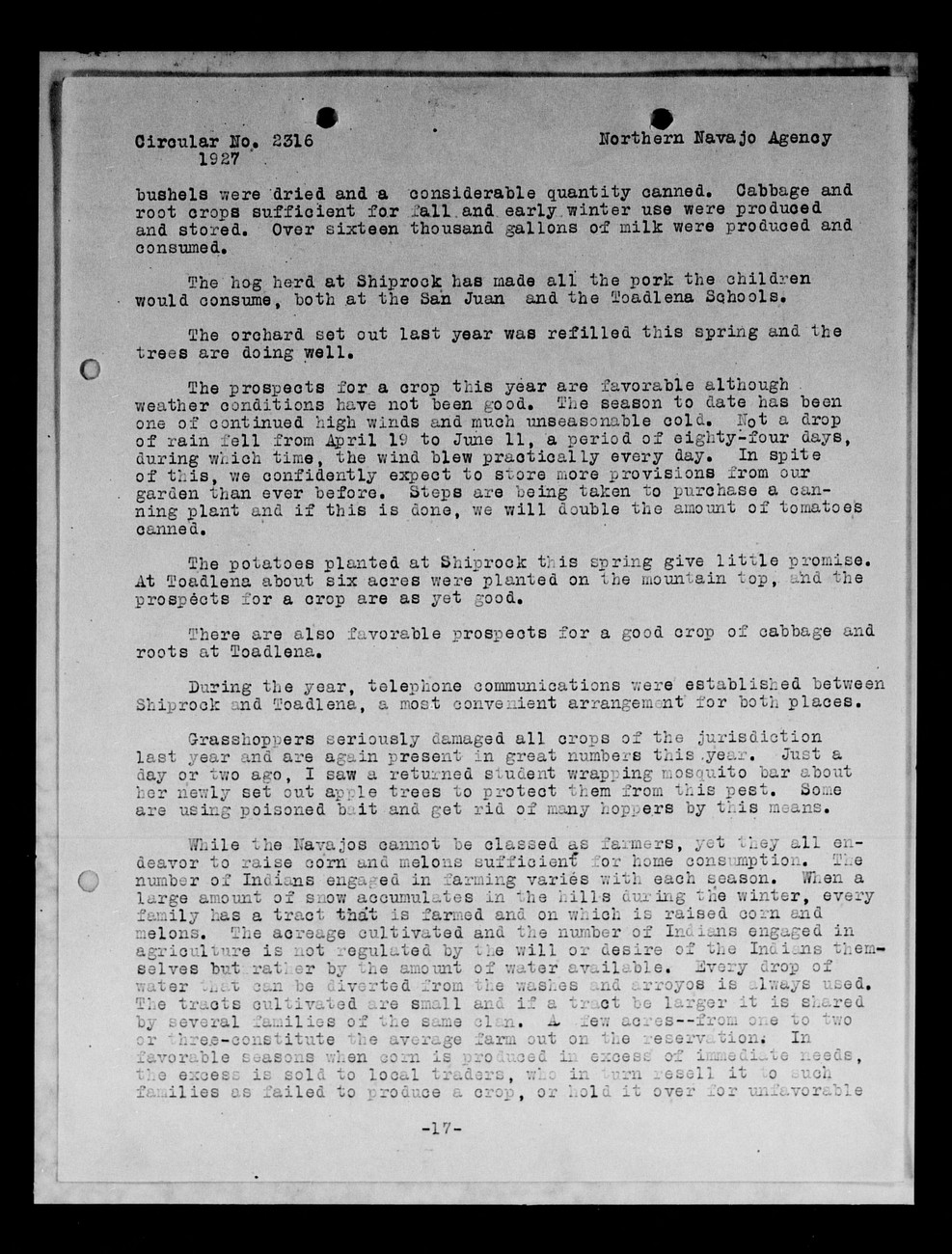 Can you help improve this?
Circular No. 2316 1927 Northern Navajo Agenoy bushels were dried and a considerable quantity canned. Cabbage and root crops sufficient for tall and early winter use were produced and stored. Over sixteen thousand gallons of milk were produced and consumed. The hog herd at Shiprook has made all the pork the children · would consume, both at the San Juan and the Toadlena Schools. The Orchard set out last year was refilled this spring and the trees are doing well. The prospects for a crop this year are favorable although weather conditions have not been good. The season to date has been one of continued high winds and much unseasonable cold. Not a drop of rain fell from April 19 to June 11, a period of eighty- four days, during which time, the wind blew praotically every day. In spite of this, we confidently expect to store more provisions from our garden than ever before. Steps are being taken to purchase a can ning plant and if this is done, we will double the amount of tomatoes canned. The potatoes planted at Shiprock this spring give little promise. At Toadlena about six acres were planted on the mountain top, and the prospects for a crop are as yet good. There are also favorable prospects for a good crop of cabbage and roots at Toadlena. During the year, telephone communications were established between Shiprock and roadlena, a most convenient arrangement for both places. Grasshoppers seriously damaged all crops of the jurisdiction last year and are again present in great numbers this year. Just a day or two ago, I saw a returned student wrapping mosquito bar about her newly set out apple trees to protect them from this pest. Some are using poisoned bait and get rid of many hoppers by this means. While the Nava jos cannot be classed as farmers, yet they all en deavor to raise corn and melons sufficient for home consumption. The number of Indians engaged in farming variés with each season. When a large amount of snow accumulates in the hills during the winter, every family has a tract that is farmed and on which is raised corn and melons. The acreage cultivated and the number of Indians engaged in agriculture is not regulated by the will or desire of the Ināians them selves but rather by the amount of water available. Every drop of water what can be diverted from the washes and arroyos is always used. The tracts cultivated are small and if a tract be larger it is shared by several families of the same clan. A few acres-- from one to two or three- constitute the average farm out on the reservation, In favorable seasons when com is produced in excess of immediate needs, the excess is sold to local traders, who in turn resell it to such families as failed to produce a crop, or hold it over for unfavorable - 17