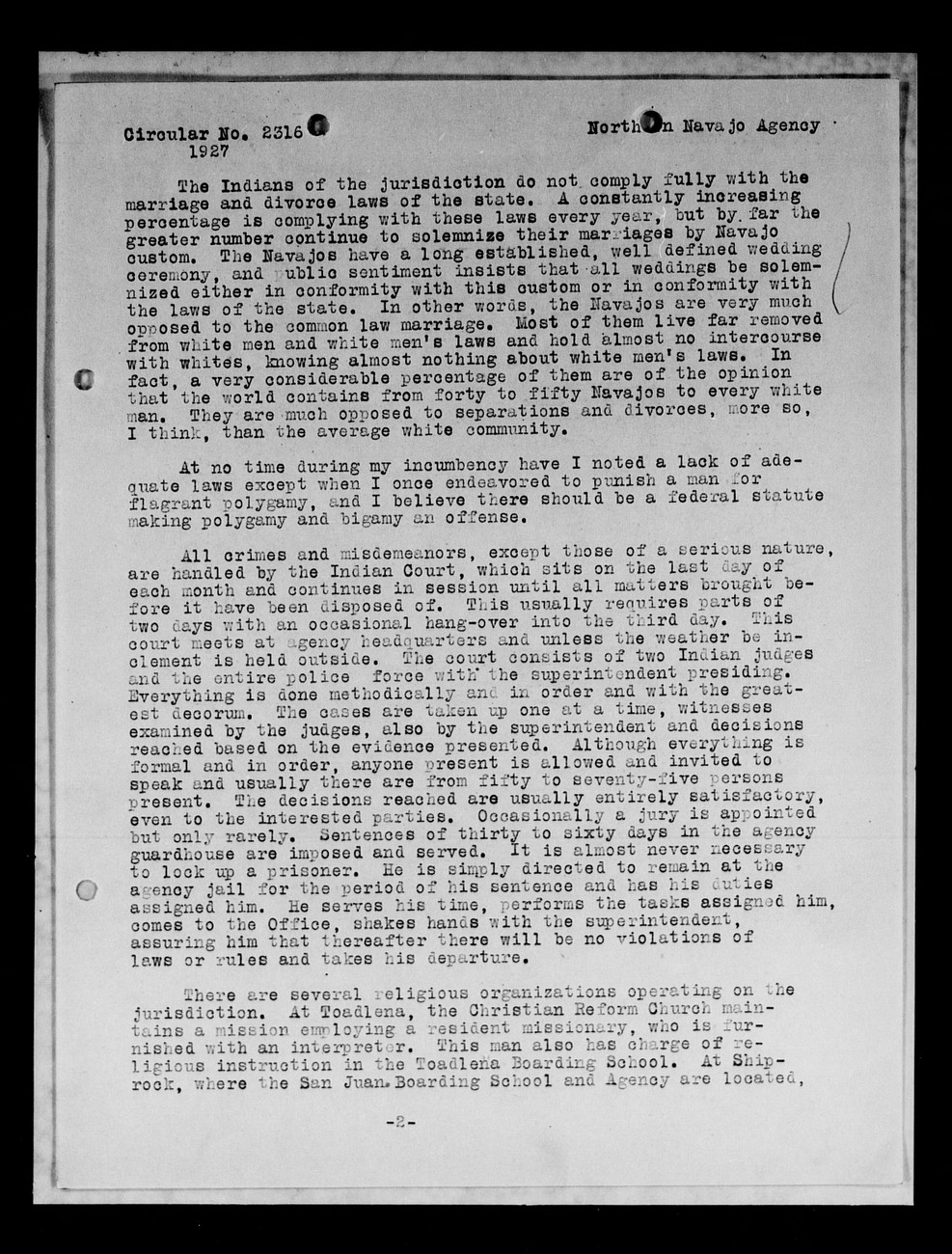 Can you help improve this?
Circular No. 2316 1927 Northun Nava jo Agency The Indians of the jurisdiction do not comply fully with the marriage and divorce laws of the state. A constantly increasing percentage is complying with these laws every year, but by. far the greater number continue to solemnize their marriages by Navajo custom. The Nava jos have a long established, well defined wedding ceremony, and public sentiment insists that all weddings be solem nized either in conformity with this custom or in conformity with the laws of the state. In other words, the Navajos are very much opposed to the common law marriage. Most of them live far removed from white men and white men' s laws and hold almost no intercourse with whites, knowing almost nothing about white men' s laws. In fact, a very considerable percentage of them are of the opinion that the world contains from forty to fifty Navajos to every white man. They are much opposed to separations and divorces, more so, I think, than the average white community. At no time during my incumbency have I noted a lack of ade quate laws except when I once endeavored to punish a man for flagrant polygamy, and I believe there should be a federal statute making polygamy and bigamy an offense. All crimes and misdemeanors, except those of a serious nature, are handled by the Indian Court, which sits on the last day of each month and continues in session until all matters brought be fore it have been disposed of. This usually requires parts of two days with an occasional hang- over into the third day. This court meets at agency headquarters and unless the weather be in element is held outside. The court consists of two Indian judges and the entire police force with the superintendent presiding. Everything is done methodically and in order and with the great est decorum, The cases are taken up one at a time, witnesses examined by the judges, also by the superintendent and decisions reached based on the evidence presented. Although everything is formal and in order, anyone present is allowed and invited to speak and usually there are from filty to seventy- five persons present. The decisions reached are usually entirely satisfactory, even to the interested parties, Occasionally a jury is appointed but only rarely. Sentences of thirty to sixty days in the agency guardhouse are imposed and served. It is almost never necessary to lock up a prisoner. He is simply directed to remain at the agency jail for the period of his sentence and has his auties assigned him. He serves his time, performs the tasks assigned him, comes to the Office, shakes hands with the superintendent, assuring him that thereafter there will be no violations of laws or rules and takes his departure. period as simply dins almost ner in the ag There are several religious organizations operating on the jurisdiction. At Toadlena, the Christian Reform Church main tains a mission employing a resident missionary, who is Iur nished with an interpreter. This man also has charge of re ligious instruction in the roadlena Boarding School. At Snip rock, where the San Juan. Boarding School ană Agency are locatea, - 2