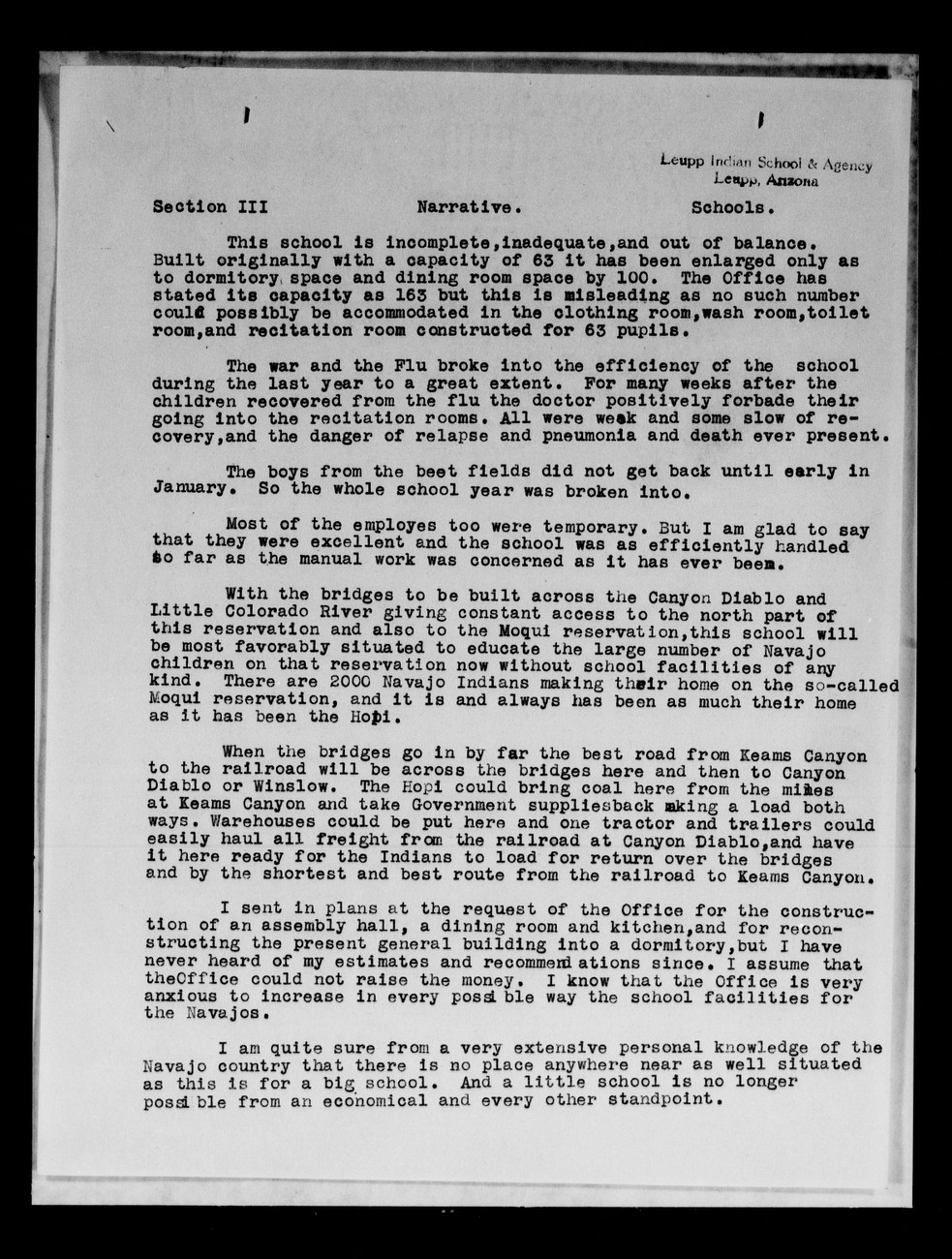 Can you help improve this?
Leupp Indian School& Agency Leapp, Anzona Section III Narrative. Schools. This school is incomplete, inadequate, and out of balance. Built originally with a capacity of 63 it has been enlarged only as to dormitory space and dining room space by 100. The office has stated its capacity as 163 but this is misleading as no such number could possibly be accommodated in the clothing room, wash room, toilet room, and recitation room constructed for 63 pupils. The war and the Flu broke into the efficiency of the school during the last year to a great extent. For many weeks after the children recovered from the flu the doctor positively forbade their going into the recitation rooms. All were weak and some slow of re covery, and the danger of relapse and pneumonia and death ever present. The boys from the beet fields did not get back until early in January. So the whole school year was broken into. Most of the employes too were temporary. But I am glad to say that they were excellent and the school was as efficiently handled so far as the manual work was concerned as it has ever been. With the bridges to be built across the Canyon Diablo and Little Colorado River giving constant access to the north part of this reservation and also to the Moqui reservation, this school will be most favorably situated to educate the large number of Navajo children on that reservation now without school facilities of any kind. There are 2000 Na vajo Indians making their home on the so- called Moqui reservation, and it is and always has been as much their home as it has been the Hopi. When the bridges go in by far the best road from Keams Canyon to the railroad will be across the bridges here and then to Canyon Dia blo or Winslow. The Hopi could bring coal here from the mines at Keams Canyon and take Government suppliesback saking a load both ways. Warehouses could be put here and one tra ctor and trailers could easily haul all freight from the railroad at Canyon Diablo, and have it here ready for the Indians to load for return over the bridges and by the shortest and best route from the railroad to Keams Canyon. I sent in plans at the request of the office for the construc tion of an assembly hall, a dining room and kitchen, and for recon structing the present general building into a dormitory, but I have never heard of my estimates and recommend ations since. I assume that theoffice could not raise the money. I know that the office is very anxious to increase in every possible way the school facilities for the Na vajos. I am quite sure from a very extensive personal knowledge of the Navajo country that there is no place anywhere near as well situated as this is for a big school. And a little school is no longer possible from an economical and every other standpoint.