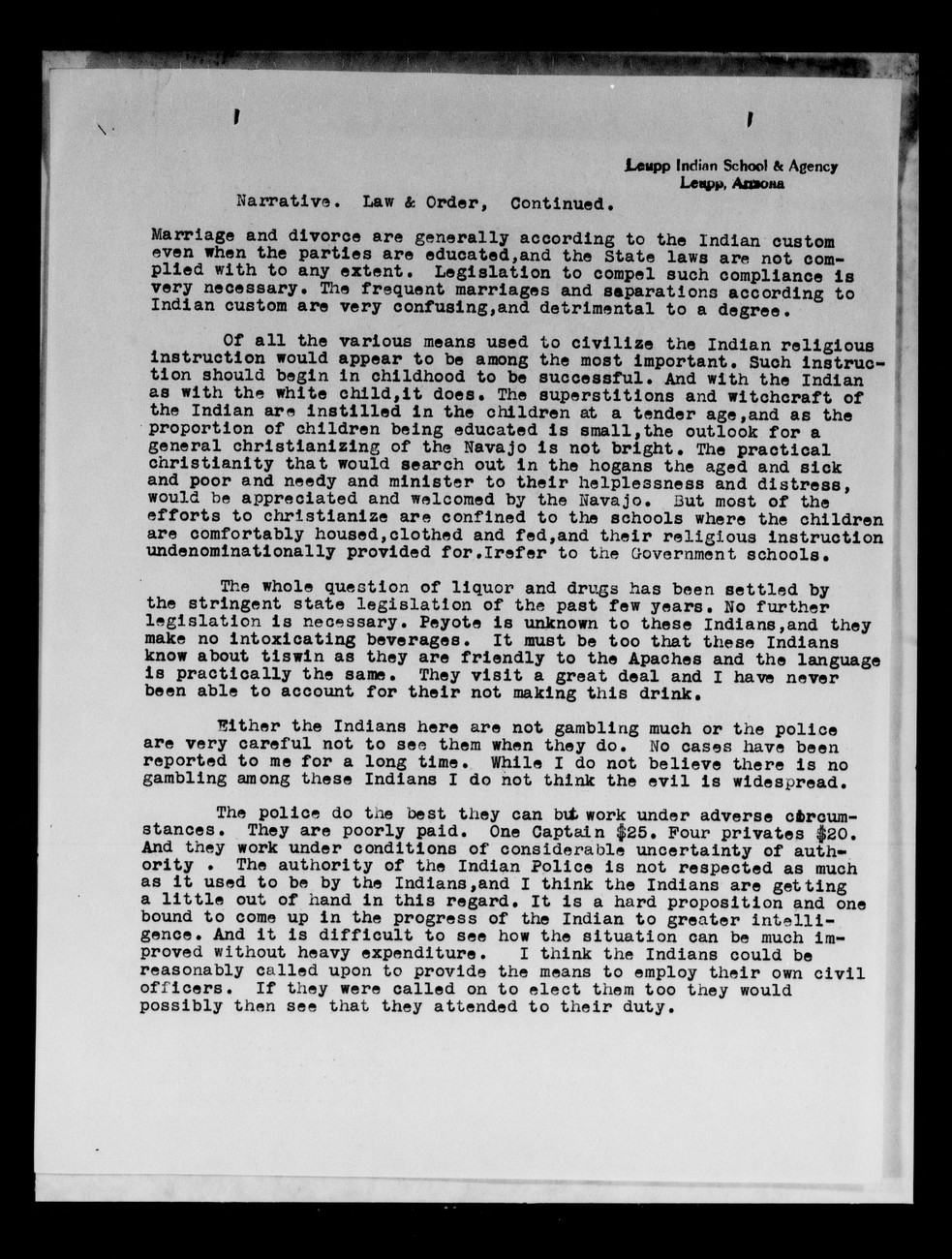 Can you help improve this?
Leupp Indian School& Agency Lepp, Aона Narrative. Law& Order, Continued. Marriage and divorce are generally according to the Indian custom even when the parties are educated, and the State laws are not com plied with to any extent. Legislation to compel such compliance is very necessary. The frequent marriages and separations according to Indian custom are very confusing, and detrimental to a degree. Of all the various means used to civilize the Indian religious instruction would appear to be among the most important. Such instruc tion should begin in childhood to be successful. And with the Indian as with the white child, it does. The superstitions and witchcraft of the Indian are instilled in the children at a tender age, and as the proportion of children being educated is small, the outlook for a general christianizing of the Navajo is not bright. The practical christianity that would search out in the hogans the aged and sick and poor and needy and minister to their helplessness and distress, would be appreciated and welcomed by the Navajo. But most of the efforts to christianize are confined to the schools where the children are comfortably housed, clothed and fed, and their religious instruction undenominationally provided for. Irefer to the Government schools. The whole question of liquor and drugs has been settled by the stringent state legislation of the past few years. No further legislation is necessary. Peyote is unknown to these Indians, and they make no intoxicating beverages. It must be too that these Indians know about tiswin as they are friendly to the Apaches and the language is practically the same. They visit a great deal and I have never been able to account for their not making this drink, Either the Indians here are not gambling much or the police are very careful not to see them when they do. No cases have been reported to me for a long time. While I do not believe there is no gambling among these Indians I do not think the evil is widespread. The police do the best they can but work under adverse corcum stances. They are poorly paid. One Captain$ 25. Four privates$ 20. And they work under conditions of considerable uncertainty of auth ority. The authority of the Indian Police is not respected as much as it used to be by the Indians, and I think the Indians are getting a little out of hand in this regard. It is a hard proposition and one bound to come up in the progress of the Indian to greater intelli gence. And it is difficult to see how the situation can be much im proved without heavy expenditure. I think the Indians could be reasonably called upon to provide the means to employ their own civil officers. If they were called on to elect them to they would possibly then see that they attended to their duty.