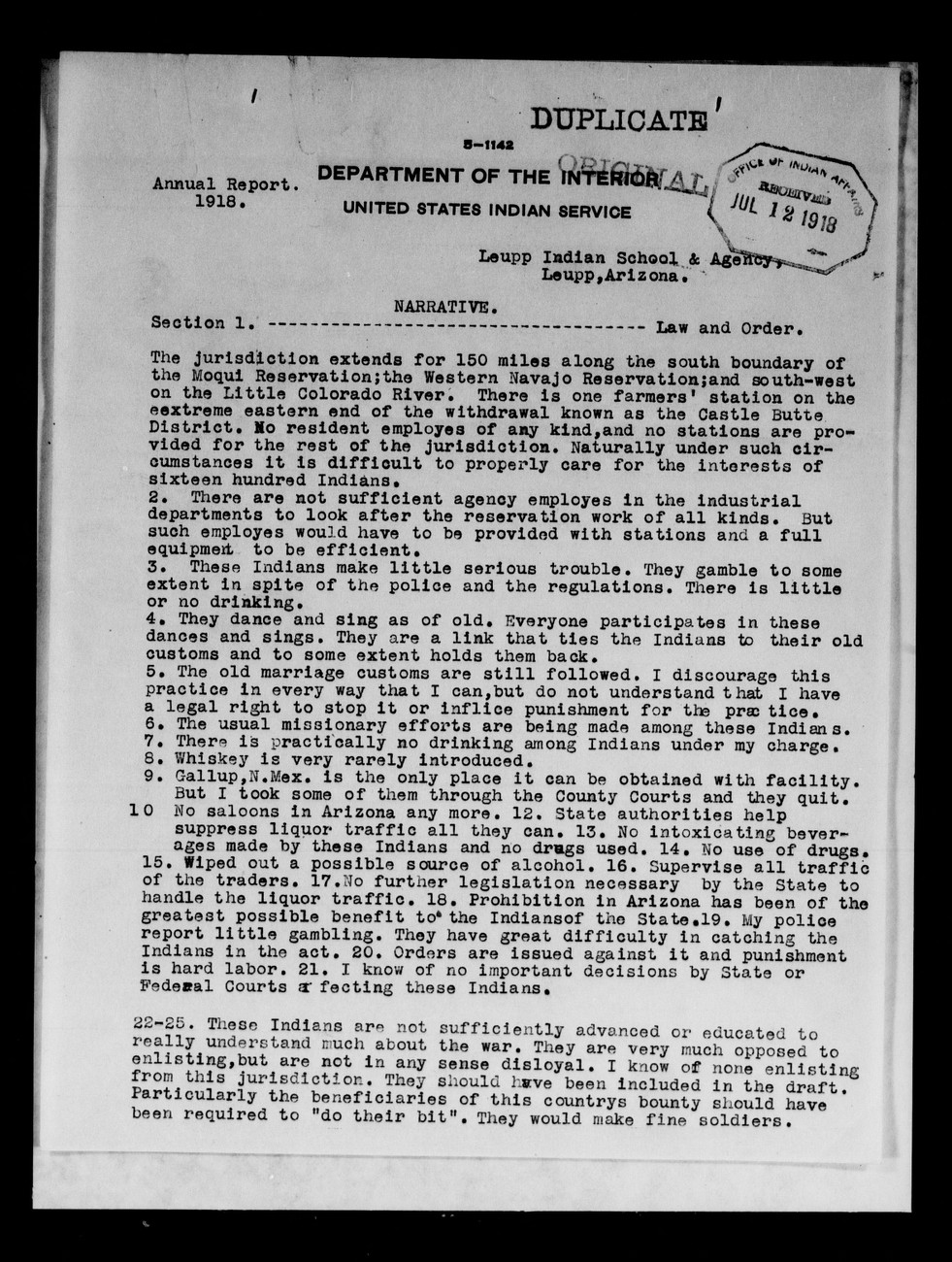 Can you help improve this?
B- 1142 DUPLICATE DEPARTMENT OF THE INTERIORTAL/* UNITED STATES INDIAN SERVICE OBERIOR AL JUL 12 1918 ce v INDIANA ABOуші An Arta Annual Report. 1918. Leupp Indian School& Agency Leupp, Arizona. NARRATIVE. Section 1.--- Law and Order. The jurisdiction extends for 150 miles along the south boundary of the Moqui Reservation; the Western Navajo Reservation; and south- west on the Little Colorado River. There is one farmers' station on the eextreme eastern end of the withdrawal known as the Castle Butte. District. No resident employes of any kind, and no stations are pro vided for the rest of the jurisdiction. Naturally under such cir cumstances it is difficult to properly care for the interests of sixteen hundred Indians, 2. There are not sufficient agency employes in the industrial departments to look after the reservation work of all kinds. But such employes would have to be provided with stations and a full equipment to be efficient. 3. These Indians make little serious trouble. They gamble to some extent in spite of the police and the regulations. There is little or no drinking. 4. They dance and sing as of old. Everyone participates in these dances and sings. They are a link that ties the Indians to their old customs and to some extent holds them ba ck. 5. The old marriage customs are still followed. I discourage this practice in every way that I can, but do not understand that I have a legal right to stop it or inflice punishment for the præ tice. 6. The usual missionary efforts are being made among these Indians. 7. There is practically no drinking an ong Indians under my charge. 8. Whiskey is very rarely introduced. Gallup, N. Mex. is the only place it can be obtained with facility. But I took some of them through the County Courts and they quit. 10 No saloons in Arizona any more. 12. State authorities help suppress liquor traffic all they can. 13. No intoxicating bever ages made by the se Indians and no drags used, 14. No use of drugs, 15. Wiped out a possible source of alcohol. 16. Supervise all traffic of the traders. 17. No further legislation necessary by the State to handle the liquor traffic. 18. Prohibition in Arizona has been of the greatest possible benefit to the Indians of the State 19. My police report little gambling. They have great difficulty in catching the Indians in the act, 20. Orders are issued against it and punishment is hard labor. 21. I know of no important decisions by State or Fedeaal Courts a fecting these Indians, 9 . 22- 25. These Indians are not sufficiently advanced or educated to really understand much about the war. They are very much opposed to enlisting , but are not in any sense disloyal. I know of none enlisting from this jurisdiction . They should have been included in the draft. Particularly the beneficiaries of this countrys bounty should have been required to" do their bit". They would make fine soldiers.