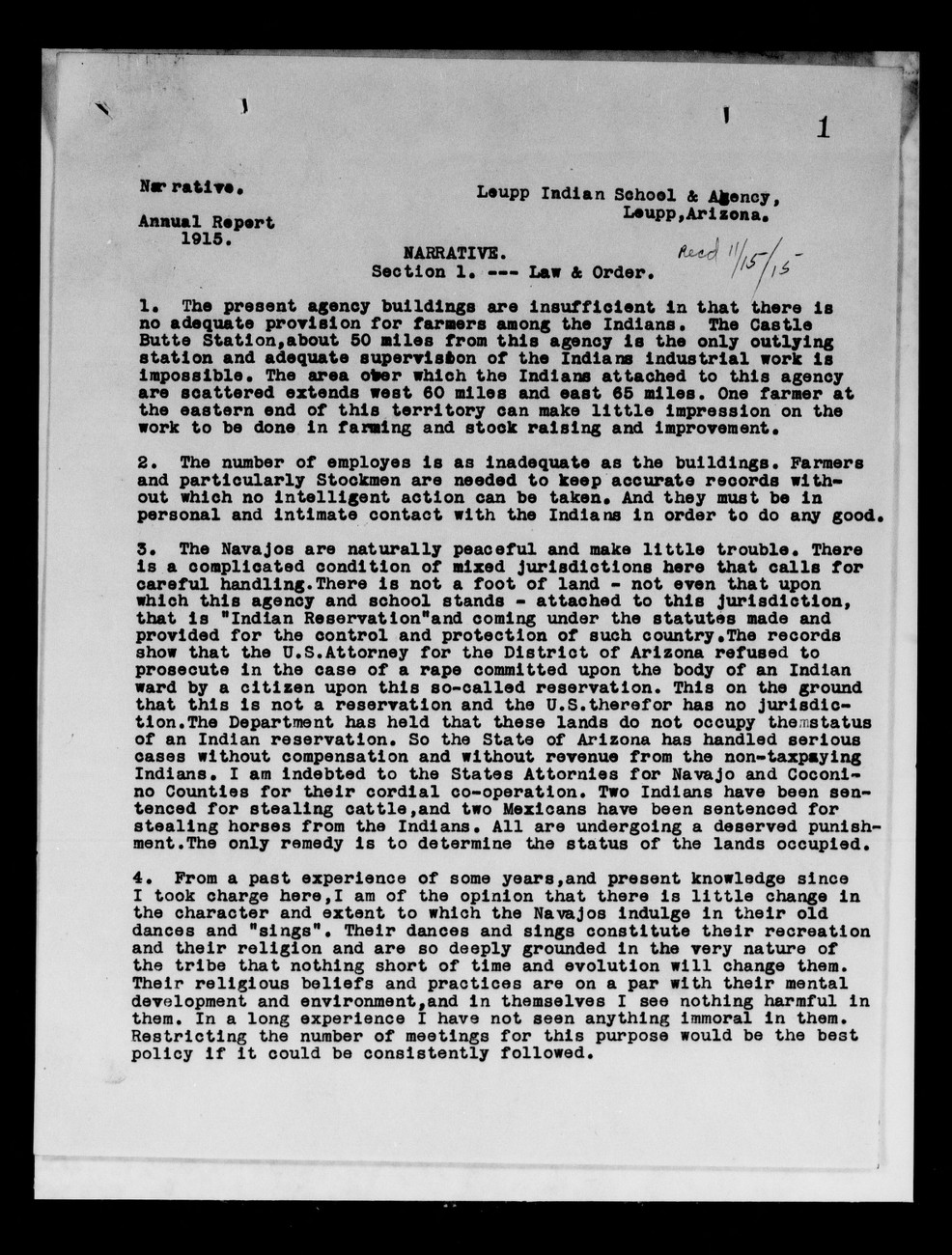 Can you help improve this?
PeA Ne ratio. Loupp Indian School& Agency, Annual Report Loupp, Arizona , 1915. NARRATIVE. Section 1,--- Law& Order. 1. The present agency buildings are insufficiont in that there is no adequate provision for farmers among the Indians. The Castle Butte Station, about 50 miles from this agency is the only outlying station and adequate supervisbon of the Indians industrial work is impossible. The area oter which the Indians attached to this agency are scattered extends west 60 miles and east 65 miles. One farmer at the eastern end of this territory can make 11ttle impression on the work to be done in farming and stock raising and improvement. 2. The number of employes is as inadequate as the buildings. Farmers and particularly Stockmen are needed to keep accurate records with out which no intelligent action can be taken. And they must be in personal and intimate contact with the India ns in order to do any good. 3. The Navajos are naturally peaceful and make 11ttle trouble. There is a complicated condition of mixed jurisdictions here that calls for careful handling. There is not a foot of land- not even that upon which this agency and school stands- attached to this jurisdiction, that is" Indian Reservation" and coming under the statutos made and provided for the control and protection of such country. The records show that the U. S. Attorney for the District of Arizona refused to prosecute in the case of a rape committed upon the body of an Indian ward by a citizen upon this so- called reservation. This on the ground that this is not a reservation and the U. S. theref or has no jurisdic tion. The Department has held that these lands do not occupy themstatus of an Indian reservation. So the State of Arizona has handled serious cases without compensation and without revenue from the non- taxpaying Indians. I am indebted to the States Attornies for Navajo and Coconi no Counties for their cordial co- operation. Two Indians have been sen tenced for stealing cattle, and two Mexicans have been sentenced for stealing horses from the Indians. All are undergoing a de served punish ment. The only remedy is to determine the status of the lands occupied. 4. From a past experience of some years, and present knowledge since I took charge here, I am of the opinion that there is little change in the character and extent to which the Na vajos indulge in their old dances and" sings". Their dances and sings constitute their recreation and their religion and are so deeply grounded in the very nature of the tribe that nothing short of time and evolution will change them. Their religious beliefs and practices are on a par with their mental development and environment, and in themselves I see nothing harmful in them. In a long experience I have not seen anything immoral in them. Restricting the number of meetings for this purpose would be the best policy if it could be consistently followed.