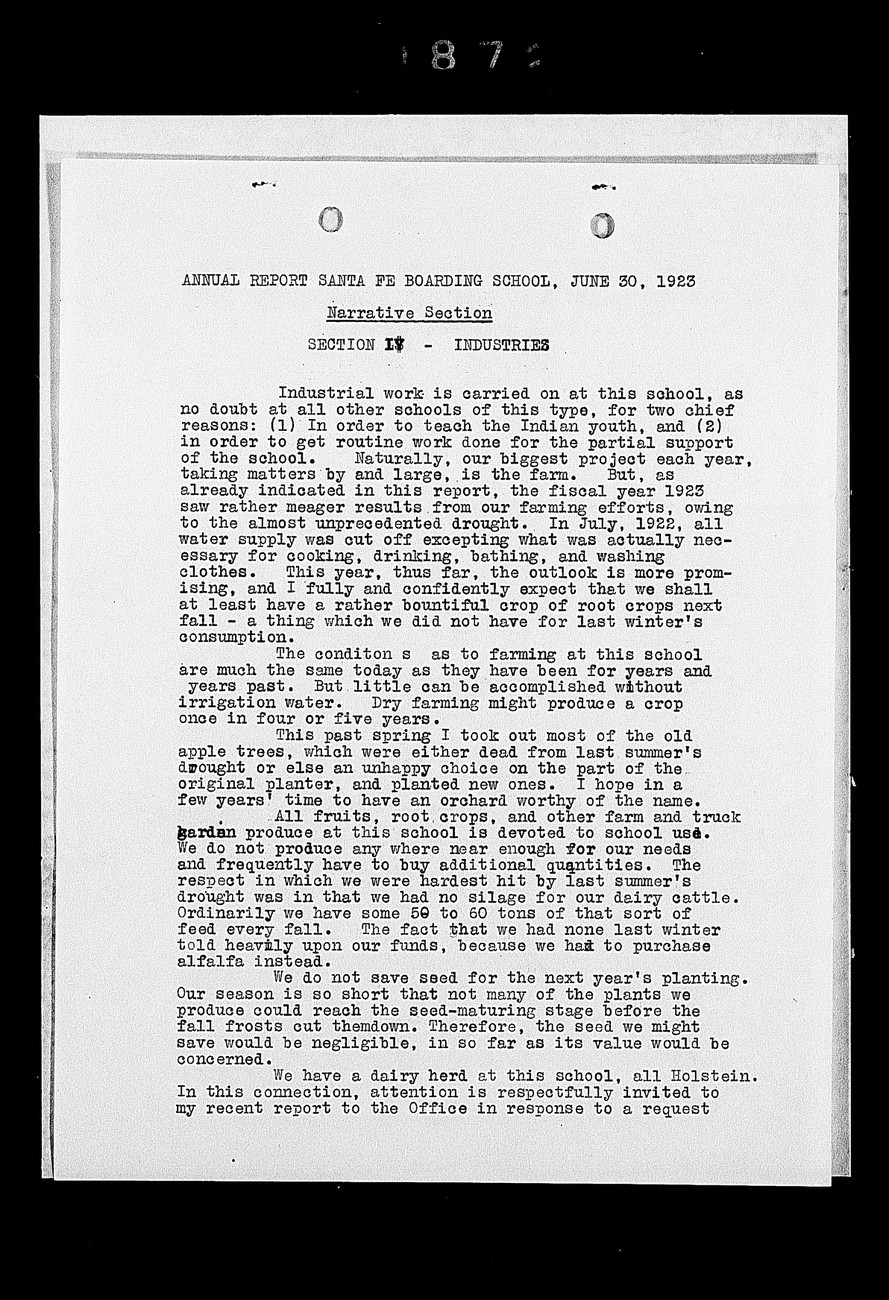 Can you help improve this?
investment intervene interconneconnairestore sentences were representative a gent RTICLE: ANNUAL REPORT SANTA FE BOARDING SCHOOL, JUNE 30, 1923 t Narrative Section SECTION IS- INDUSTRIES Industrial work is carried on at this school, as no doubt at all other schools of this type, for two chief reasons:( 1) In order to teach the Indian youth, and( 2) in order to get routine work done for the partial support of the school. Naturally, our biggest project each year, taking matters by and large, is the farm But, as already indicated in this report, the fiscal year 1923 saw rather meager results from our farming efforts, owing to the almost unprecedented drought. In July, 1922, all water supply was cut off excepting what was actually nec essary for cooking, drinking, bathing, and washing clothes This year, thus far, the outlook is more prom ising, and I fully and confidently expect that we shall at least have a rather bountiful crop of root crops next fall- a thing which we did not have for last winter' s consumption The conditon s as to farming at this school are much the same today as they have been for years and years past. But little can be accomplished without irrigation water Dry farming might produce e a crop once in four or five years This past spring I took out most of the old apple trees, which were either dead from last summer' s drought or else an unhappy choice on the part of the original planter, and planted new ones. I hope in a few years time to have an orchard worthy of the name All fruits, root crops, and other farm and truck Barden produce at this school is devoted to school usa We do not produce any where near enough for our needs and frequently have to buy additional quantities. The respect in which we were hardest hit by last summer' s drought was in that we had no silage for our dairy cattle Ordinarily we have some 50 to 60 tons of that sort of feed every fall The fact that we had none last winter told heavily upon our funds, because we had to purchase alfalfa instead We do not save seed for the next year' s planting Our season is so short that not many of the plants we produce could reach the seed- maturing stage before the fall frosts cut themdown Therefore, the seed we might save would be negligible, in so far as its value would be concerned We have a dairy herd at this school, all Holstein In this connection, attention is respectfully invited to my recent report to the Office in response to a request