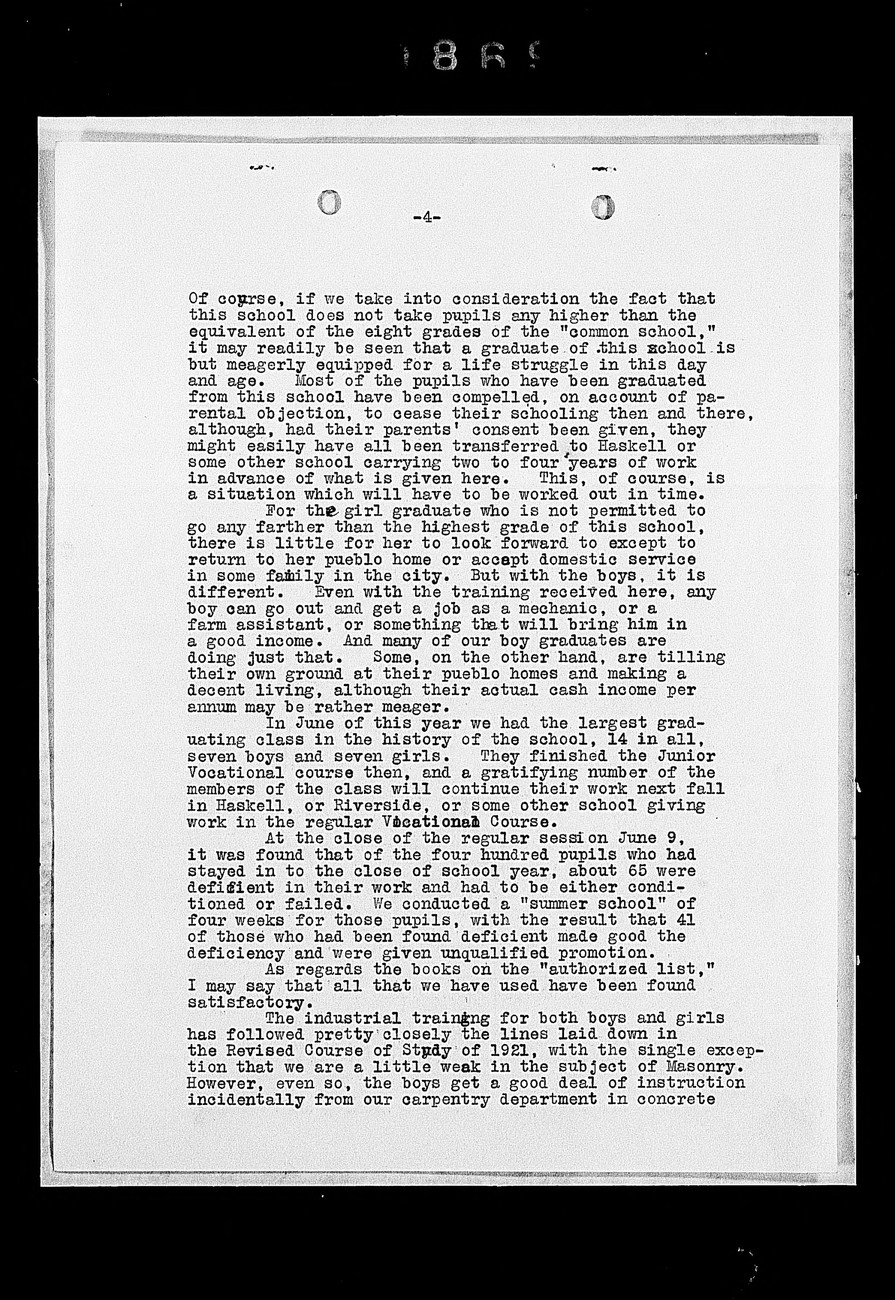 Can you help improve this?
Of coyrse if we take into consideration the fact that this school does not take pupils any higher than the equivalent of the eight grades of the" common school, it may readily be seen that a graduate of this chool is but meagerly equipped for a life struggle in this day and age Most of the pupils who have been graduated from this school have been compelled, on account of pa rental objection, to cease their schooling then and there although, had their parents' consent been given, they might easily have all been transferred to Haskell or some other school carrying two to four years of work in advance of what is given here This, of course, is a situation which will have to be worked out in time For the girl graduate who is not permitted to go any farther than the highest grade of this school, there is little for her to look forward to except to return to her pueblo home or accept domestic service in some family in the city. But with the boys, it is different Even with the training received here, any boy can go out and get a job as a mechanic, or a. farm assistant, or something that will bring him in a good income. And many of our boy graduates are doing just that. Some, on the other hand, are tilling their own ground at their pueblo homes and making a decent living, although their actual cash income per annum may be rather meager In June of this year we had the largest grad uating class in the history of the school, 14 in all, seven boys and seven girls They finished the Junior Vocational course them, and a gratifying number of the members of the class wil continue their work next fall in Haskell, or Riverside or s ome other school giving work in the regular Vocationan Course At the close of the regular sessi on June 9, it was found that of the four hundred pupils who had stayed in to the close of school year, about 65 were defi€ient in their work and had to be either condi tioned or failed VWe conducted a" summer school" of four weeks for those pupils, with the result that 41 of those who had boen found deficient made good the deficiency and were given unqualified promotion As regards the books on the" authorized list," I may say that all that we have used have been found satisfactory The industrial traingng for both boys and girls has followed pretty closely the lines laid dowm in the Revised Course of Styray of 1927, with the single excep. tion that we are a little weak in the subject of Masonry. However, even so, the boys get a good deal of instruction incidentally from our carpentry department in concrete