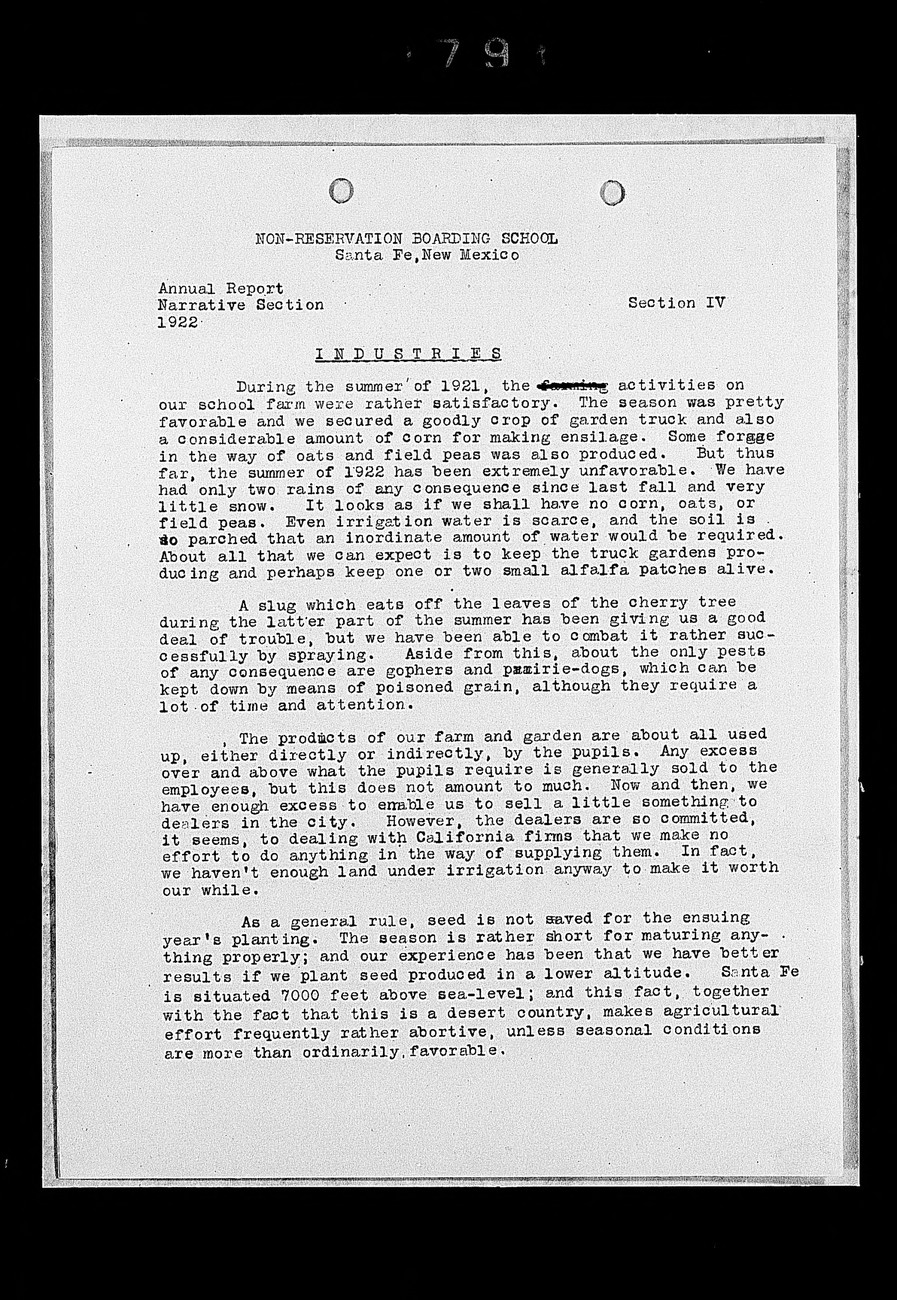 Can you help improve this?
NON- RESERVATION BOARDING SCHOOL Santa Fe, New Mexico Annual Report Narrative Section 1922 Section IV I ND U S T R ITS During the summer' of 1921, the evening activities on our school fax m were rather satisfactory. The season was pretty favorable and we secured a goodly crop of garden truck and also a considerable amount of corn for making ensilage. Some forage in the way of oats and field peas was also produced But thus far, the sunrner of 1922 has been extremely unfavorable. We have had only two rains of any consequence sinc e last fall and very little snow. It looks as if we shall have no corn, oats, or field peas. Even irrigation water is scarce, and the soil is do parched that an inordinate amount of water would be required About all that we can expect is to keep the truck gardens pro ducing and perhaps keep one or two small alfalfa patches alive A slug which eats off the leaves of the cherry tree during the latter part of the summer has been giving us a good deal of trouble, but we have been able to c ambat it rather suc cessfully by spraying Aside from this, about the only pests of any consequence are gophers and pairie- dogs, which can be kept down by means of poisoned grain, although they require a lot of time and attention. The prodic ts of our farm and garden are about all used up, either directly or indirectly, by the pupils. Any excess over and above what the pupils require is generally sold to the employees, but this does not amount to much. Now and then, we have enough excess to enable us to sell a little something to dealers in the city, However, the dealers are so committed, it seems, to dealing with California firms that we make no effort to do anything in the way of supplying them. In fact, we haven' t enough land under irrigation anyway to make it worth our while As a general rule, seed is not saved for the ensuing year' s planting. The season is rather short for maturing any thing properly and our experience has been that we have better results if we plant seed produced in a lower altitude. Santa Fe is situated 7000 feet above sea- level; and this fact, together with the fac t that this is a desert country, makes agricultural effort frequently rather abortive, unless seasonal conditions are more than ordinarily, favorable