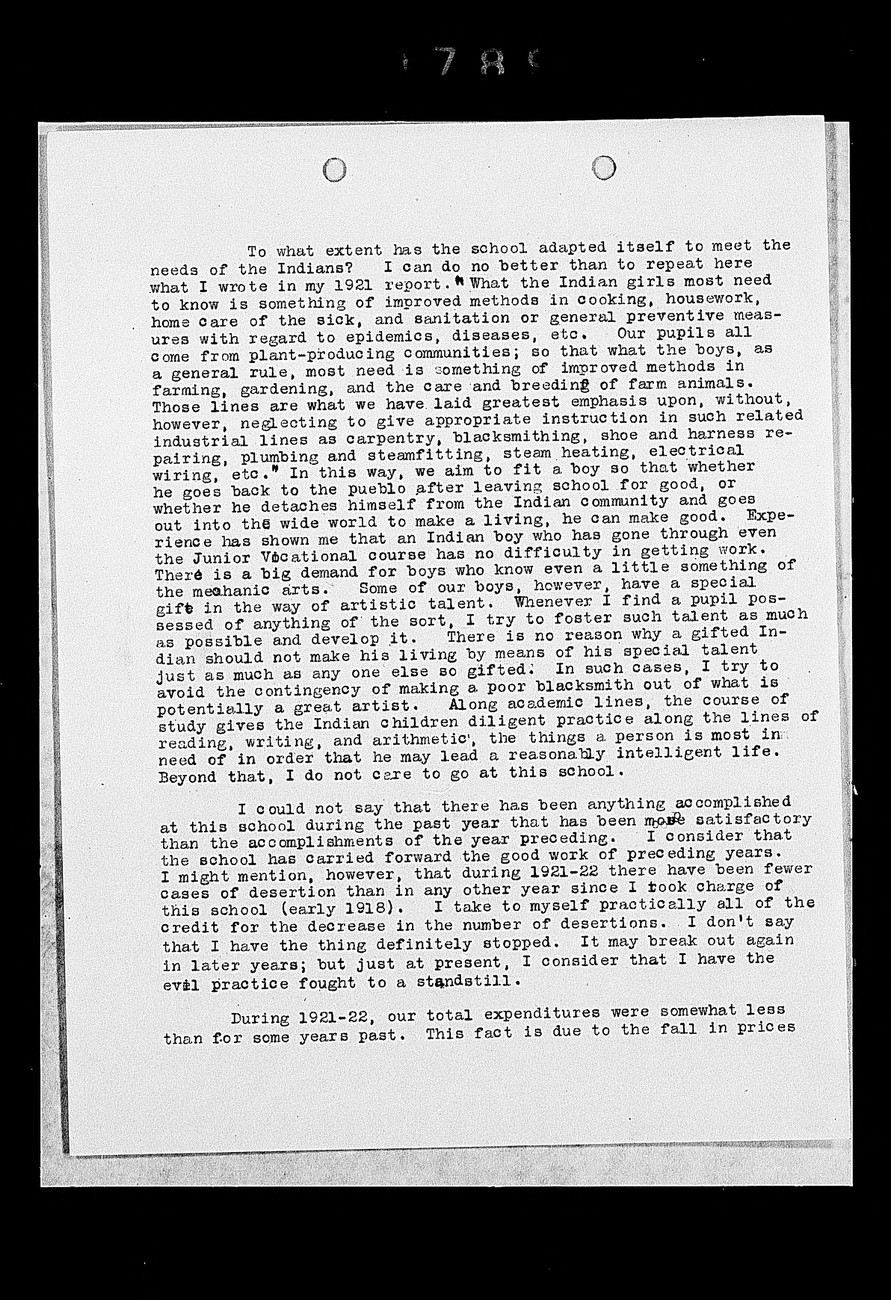 Can you help improve this?
To what extent has the school adapted itself to me needs of the Indians? I can do no better than to repeat here what I wrote in my 192l report. h What the Indian girls most need to know is something of improved methods in cooking, housework, home care of the sick, and sanitation or general preventive meas ures with regard to epidemics, diseases, etc. Our pupils all C one from plant- producing communities, so that what the boys, as a general rule, most need is something of improved methods in farming, gardening, and the care and breeding of far m animals Those lines are what we have laid greatest emphasis upon without however neglecting to give appropriate instruction in such related industrial lines as carpentry, blacksmithing shoe and harness res pairing, plumbing and steamfitting, steam heating, electrical wiring, etc. In this way, we aim to fit a boy so that whether he goes back to the pueblo after leaving school for good, or whether he detaches himself from the Indian community and goes out into the wide world to make a living, he can make good. Expe rience has shown me that an Indian boy who has gone through even the Junior Vdc ational course has no difficulty in getting work There is a big demand for boys who know even a little something of the meehanic arts Some of our boys, however, have a special. gift in the way of artistic talent Whenever I find a pupil pos sessed of anythin of the sort, I try to foster such talent as much as possible and develop There is no reason why a gifted In dian should not make his living by means of his special talent Just as much as any one else 30 gifted In such cases, I try to avoid the contingency of making a poor blacksmith out of what is potentially a great artist Along academic lines, the course of study gives the Indian children diligent practice along the lines of reading , writings, and arithmetic' things a person is most in need of in order that he may lead a reasona hly intelligent life Beyond that, I do not cere to go at this school. I could not say that there has been anything accomplished at this school during the past year that has been masſe satisfactory than the acc omplishments of the year preceding I consider that the school has carried forward the good work of prec eding years I might mention, however, that during 1921- 22 there have been fewer cases of desertion than in any other year since I took charge of this school( early 1918) I take to my self practically all of the Credit for the decrease in the number of desertions I don' t say that I have the thing definitely stopped It may break out again in later years; but just at present I consider that I have the evil practice fought to a standstill During 1921- 22, our total expenditures were somewhat less than for some years past This fact is due to the fall in prices