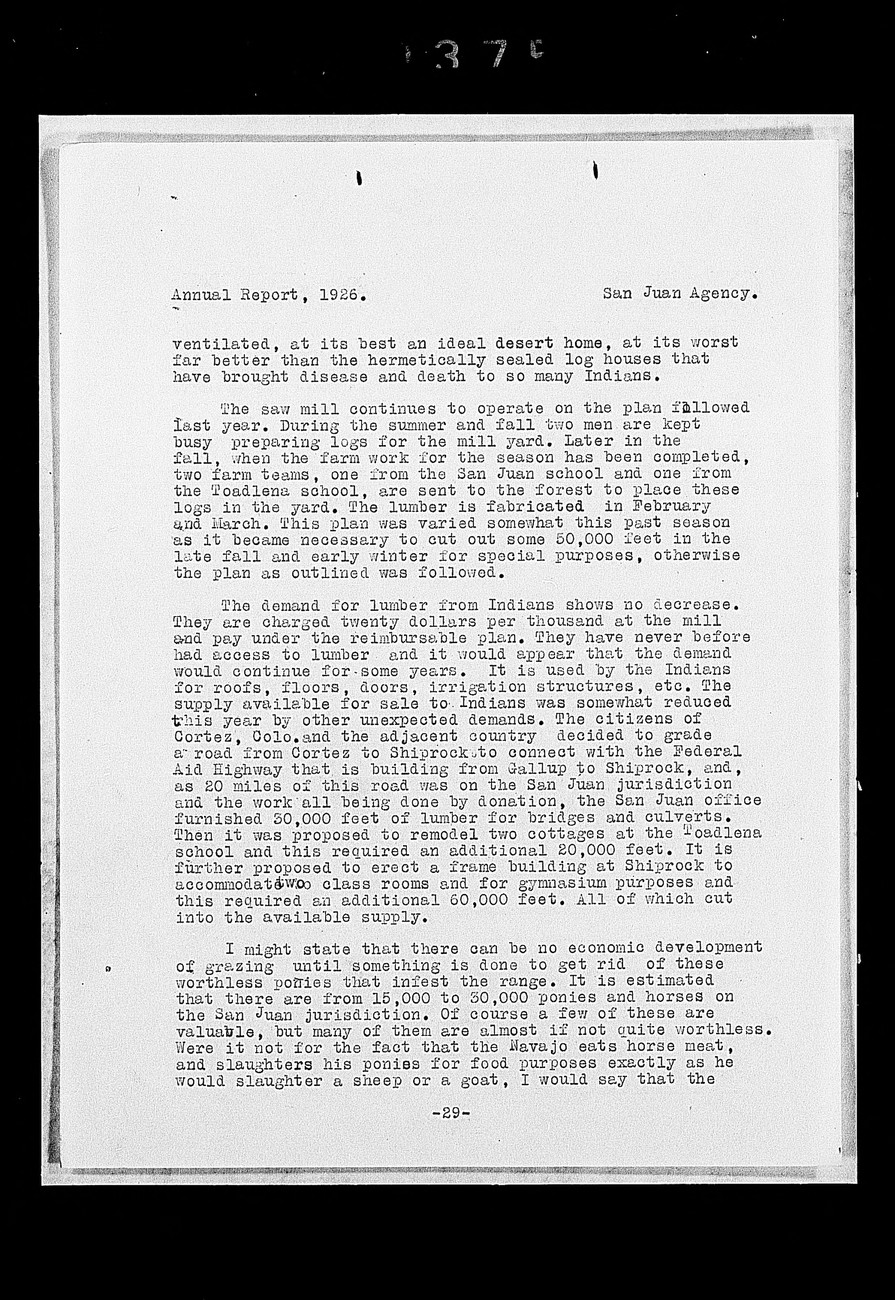 Can you help improve this?
Annual Report, 1926 San Juan Agency ventilated, at its best an ideal desert home, at its worst far better than the hermetically sealed log houses that have brought disease and death to so many Indians. The saw mill continues to operate on the plan iDllowed last year. During the svmmer and fall two men are kept busy preparing logs for the mill yard. Later in the fall, when the farm work for the season has been completed two farm teams, one fr on the San Juan school and one from the Toadlene school, are sent to the forest to place these logs in the yard. The lumber is fabricated in February and March. This plan was varied somewhat this past season as it became necessary to cut out some 50, 000 feet in the lete fall and early winter for special purposes, otherwise he plan as outlined was followed. The demand for under iro In Indians shows no âecrease. They are charged twenty dollars per thousand at the mill and pay under the reimbursable plan. They have never before had access to lumber and it would appear that the demand would continue for some years. It is used by the Indians for roofs, floors, doors, irrigation structures, etc. The supply available for sale to Indians was somewhat reduced this year by other unexpected demands. The citizens of Cortez, Colo. and the adjacent country decided to grade a road iron Cortez to Shiprock to connect with the Federal ia Highway that is building from Gallup to Shiprock, and, as 20 miles of this road was on the San Juan jurisdiction and the work all being d one by a onetion, the San Juan office furnished 50, 000 feet of lumber for bridges and culverts Then it was proposed to remodel two cottages at the boaalena school and this required an additional 20, 000 feet. It is further proposed to erect a frame building at Shiprock to accommodata was class rooms and for gymnasiun purposes and this required an additional 60, 000 Ifeet. All of which cut into the available supply. I night state that there can be no econonic development of grazing until s omething is a one to get rid of these worthless ponies that infest the range. It is estimated that there are from 15, 000 to 50, 000 ponies and horses on the San Juan jurisdiction. Of course a few of these are valuable, but many of them are almost if not quite worthless Were it not for the fact that the Navajo eats horse neat and slaughters his ponies for food purposes exectly as he would slaughter a sheep or a goat, I would say that the 29