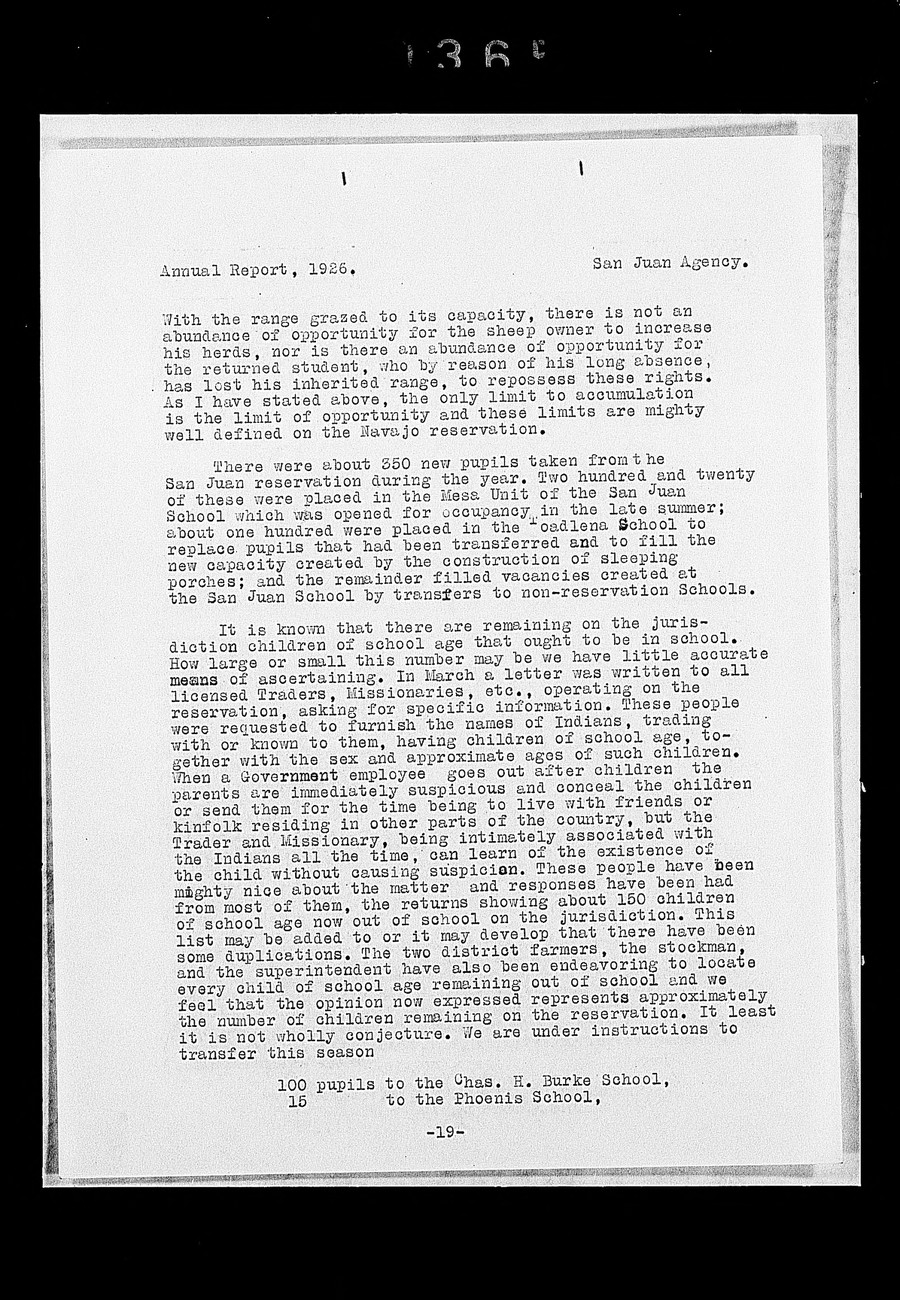 Can you help improve this?
Annual Report, 1926. San Juan Agency . With the range Brazed to its capacity, there is not an abundance or opportunity for the sheep owner to increase his herds, nor is there an abundance of opportunity for the returned student, who by reason of his long absence, has lost his inherited range, to repossess those rights. As I have stated above, the only limit to accumulation is the limit of opportunity and these limits are mighty tell defined on the Navajo reservation There were about 350 new pupils taken from the San Juen reservation during the year. Two hundred and twenty of these were placed in the Miese Unit of the San Juan School which was opened for occupancy in the late summer; about one hundred were placed in the oadlena School to replace pupils that had been transferred and to fill the new capacity created by the construction of sleeping porches; end the remainder filled vacancies created at the San Juan School by transfers to non- reservation Schools It is known that there are remaining on the juris diction children of school age that ought to be in school. How large or smell this number may be we have little accurate means of ascertaining. In March 8 letter vies written to all licensed Traders, Lissionaries, etc., operating on the reservation, asking for specific information. These people were requested to furnish the narnes of Indians, trading with or known to them, having children of school age, to gether with the sex and approximate ages of such children Then a Government employee goes out after children the parents are immediately suspicious and conceal the children or send them for the time being to live with friends or kinfolk residing in other parts of the country, but the Trader and Miissionary, being intimately associated with the Indians all the time, can learn of the existence of the child without causing suspicion. These people have been mighty nice about the matter and responses have been had from most of then, the returns showing about 150 children of school age now out of school on the jurisdiction. This list may be added to or it may develop that there have been some duplications. The two district farmers, the stockman, and the superintendent have also be en endeavoring to locate every child of school age renaining out of school end we feel that the opinion now expressed represents approximately the number of children remaining on the reservation. It least it is not wholly conjecture. We are under instructions to transfer this season 100 pupils to the Chas. H. Burke School 15 to the Phoenis School 19