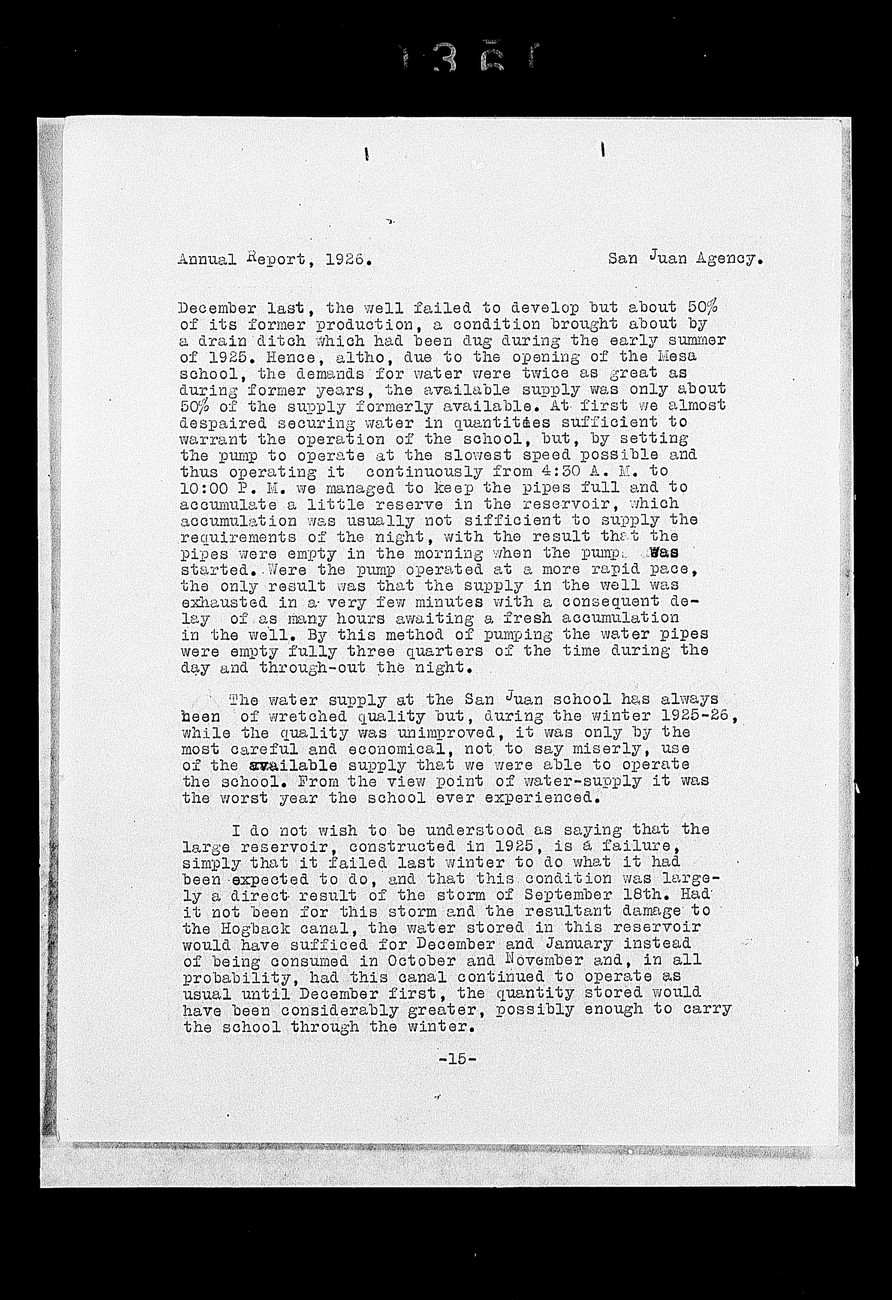 Can you help improve this?
Annual Report, 1926. San Juan Agency. December last, the well failed to develop but about 50% of its former production, a condition brought about by drain ditch which had been dug during the early summer of 1925. Hence, altho, due to the opening of the Miese school, the demands for water were twice as great as during former years, the available supply wes only about 50% of the supply formerly available. At first we almost diespaired securing water in quantith es sufIicient to warrant the operation of the school, but, by setting the pump to operate at the slowest speed possible and thus operating it continuously from 4: 30 A. L. to 10: 00 P. M. we managed to keep the pipes Pull end to accumulate a little reserve in the reservoir, which accumulation Wes usually not si£ficient to supply the requirements of the night, with the result the t the pipes were empty in the morning when the pump: Was started.. ere the pump operated at e more rapid pace the only result was that the supply in the well was exhausted in a very few minutes with e consequent de ley of as many hours Swaiting a fresh accumulation in the well. By this method of pumping the water pipes were empty fully three quarters of the time during the dey and throughout the night. The water supply at the San Juan school has always been of wretched quality but, during the Winter 1925- 26, while the quality was unimproved, it was only by the most careful and economical, not to say miserly, use of the IIailable supply that we rere able to operate the school. From the view point of water- supply it was the worst year the school ever experienced. I do not wish to be understood as saying that the large reservoir, constructed in 1925, is a, failure, simply that it failed last winter to do what it had been expected to do, and that this condition was large ly a direct result of the storm of September 18th. Had it not been ior this storm end the resultant damage to the Hogback canal, the water stored in this reservoir would have sufficed for December and January instead of being consumed in October and November and, in all probability, had this canal continued to operate as usual until December first, the quantity stored would have been considerably greater, possibly enough to carry the school through the winter. 15