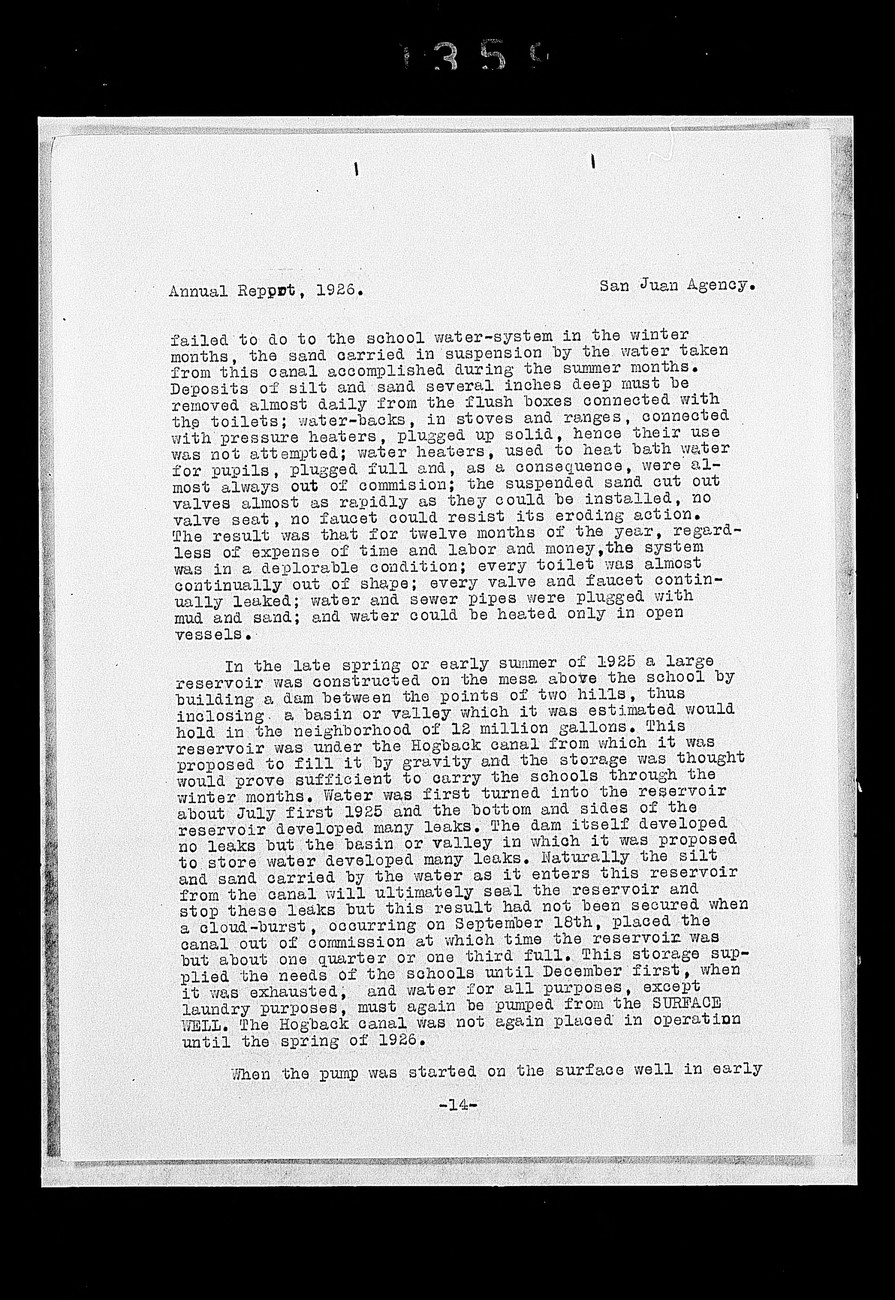 Can you help improve this?
Annual Reppot, 1926 San Juan Agency failed to do to the school water- system in the winter months, the sand carried in suspension by the water taken from this canal accomplished during the summer months. Deposits of silt and sand several inches deep must be removed almost daily from the flush boxes connected with the toilets later- backs, in stoves and ranges, connected with pressure heaters, plugged up solid, hence their use was not attempted; water heaters, used to heet bath water for pupils, plugged full and, as a consequence, were al most always out of commision, the suspended sand cut out valves almost as rapidly as they could be installed, no valve seat, no faucet could resist its eroding action. The result was that for twelve months of the year, regard less of expense of time and labor and money, the system was in a deplorable condition; every toilet was almost continually out of shape; every valve and faucet contin ually leaked; water and sewer pipes were plugged with nud and sand; and weter could be heated only in open vessels. In the late spring or early summer of 1925 a large reservoir was constructed on the mesa above the school by building a dam between the points of two hils, thus inclosing a basin or valley which it was estimated would hold in the neighborhood of 12 million gallons. This reservoir was under the Hogback canal from which it was proposed to fill it by gravity and the storage was thought would prove sufficient to carry the schools through the Winter nonths. Weter was first turned into the reservoir about July first 1925 and the bottom and sides of the reservoir developed many leaks. The dam itself developed no leaks but the basin or valley in which it was proposed to store water developed many leaks, Naturally the silt and sand carried by the water as it enters this reservoir from the canal will ultimately seal the reservoir and stop these leaks but this result had not been secured when a cloud- burst, occurring on September 18th, placed the canal out of commission at which time the reservoir was but about one quarter or one third full. This storage sup plied the needs of the schools until December first, when it was exhausted, and water for all purposes, except laundry purposes, must again be pumped from the SURFACE WELL, The Hogback canal was not egain placed in operation until the spring of 1926. Ahon the pump was started on the surface well in early 14