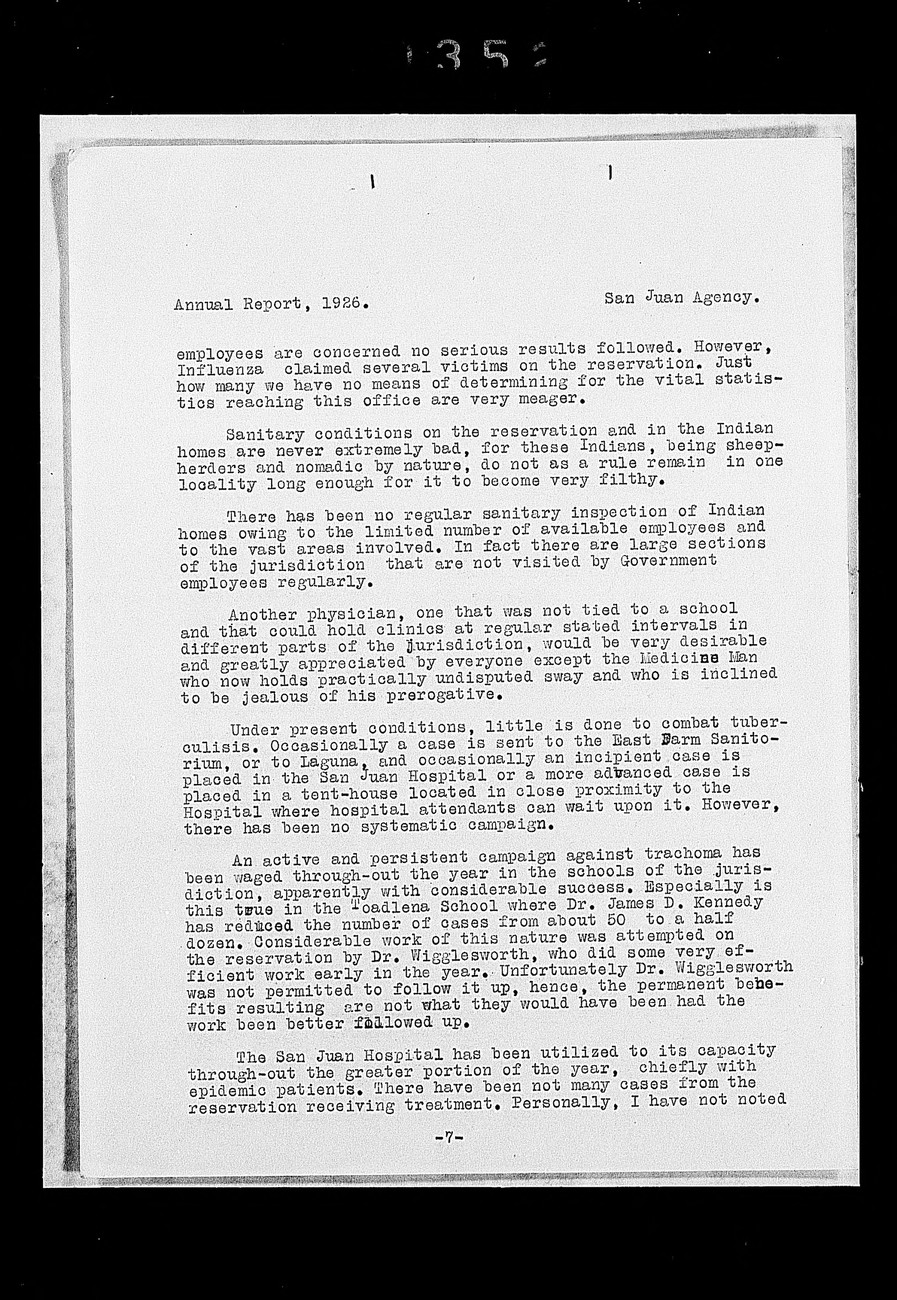 Can you help improve this?
Annual Report, 19 26 San Juan Agency employees are concerned no serious results followed. However, Influenza claimed several victims on the reservation. Just how many we have no means of determining for the vital statis tics reaching this office are very meager. Sanitary conditions on the reservation and in the Indian homes are never extremely bad, for these Indians, being sheep herders and nonadic by nature, do not as a rule rerna. in in one locality long enough for it to become very filthy. There has beon no regular sanitary inspection of Indian homes owing to the limited number of available employeos and to the vast areas involved. In fact there are large sections of the jurisdiction that are not visited by Government employees regularly Another physician, one that was not tied to a school and that could hold clinics at regular stated intervals in different parts of the jurisdiction, would be very desirable and greatly appreciated by everyone except the Iliedicine Ilan who now holds practically undisputed sway and who is inclined to be jealous of his prerogative, Under present conditions, little is done to combat tuber culisis, Occasionally a case is sent to the East Farm sanito rium, or to Laguna, and occasionally an incipient case is placed in the San Juan Hospital or a more advanced case is placed in a tont- house located in close proximity to the Hospital where hospital attendants can wait upon it. However, there has been no systematic campaign. An active and persistent campaign against trachoma has been waged through- out the year in the schools of the juris diction, apparently with considerable success. Especially is this true in the T oadlena School where Dr. Jarnes D. Kennedy has red iced the number of cases fr on about 50 to a half dozen. Considerable work of this nature was attempted on the reservation by Dr. Wigglesworth, who did some very ef. ficient work early in the year. Unfortunately Dr. Wigglesworth was not permitted to follow it up, hence, the permanent beha - fits resulting are not what they would have been had the work been better followed up. The San Juan Hospital has been utilized to its capacity through- out the greater portion of the year, chiefly with epidemic patients. There have been not many cases from the reservation receiving treatment. Personally, I have not noted