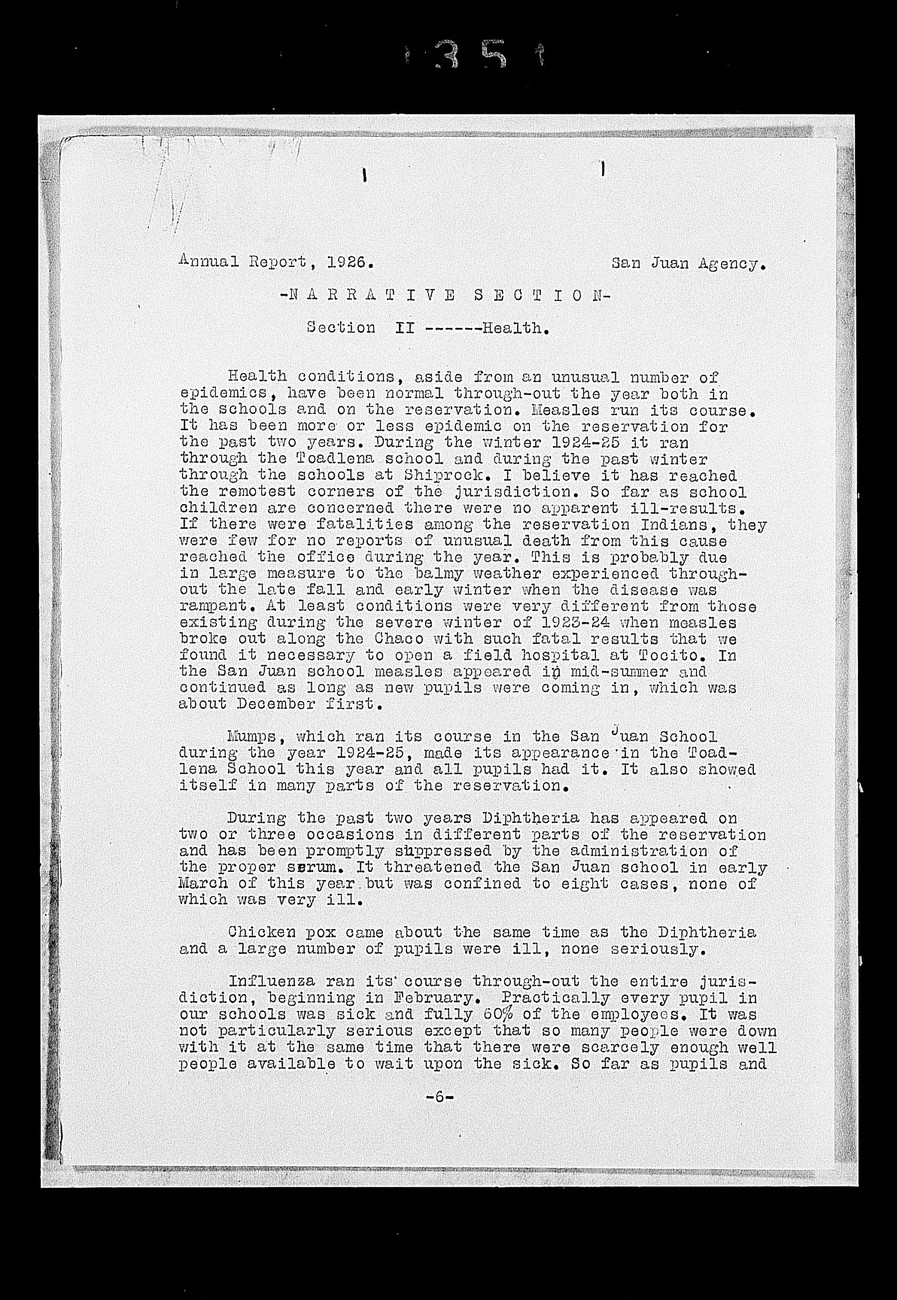 Can you help improve this?
Annual Report, 1926 San Juan Agency. - IN A R R A T I VES E C T I O N. Section II Health Health conditions, aside froin an unusual number of epidemics, have been normal throughout the year both in the schools and on the reservation. Measlos run its course, It has been more or less epidemic on the reservation for the past two years. During the winter 1924- 25 it ran through the Toadlena school and aduring the past winter through the schools at Shiprock. I believe it has reached the remotest corners of the jurisdiction. So far as school children are concerned the re were no apparent ill- results If there were fatalities among the reservation Indians, they were few for no reports of unusual death from this cause reached tine office during the year. This is probably due in large measure to the Belmy weather experienced through out the late fall and early winter when the disease was rampant. At least conditions were very diiſerent from those existing during the severe winter of 1923- 24 when neasles broke out along the Chaco with such fatal results that we found it necessary to open a field hospital at Toci to. In the San Juan school measles appeared ig mid- summer and continued s long as new pupils were coming in, which was about December first. Mfumps, which ran its course in the San uan School during the year 1924- 25, InEade its appearance in the Toad lena School this year and all pupils had it. It also showed itself in many parts of the reservation. During the past two years Diphtheria has appeared on two or three occasions in different parts of the reservation and has be on promptly suppressed by the administration of the propor S Brum. It threatened the San Juan school in early March of this year but was confined to eight cases, none of which wEas very i11. Chicken pox came about the same time as the Diphtheria and a large number of pupils were ill, none seriously. Influenza ran its course through- out the entire juris diction, beginning in February. Practical ly every pupil in our schools was sick and fully 60% of the employees. It was not particularly serious except that so many people wore down with it at the same time that there were scarcely enough well people available to wait upon the sick. So far as pupils and