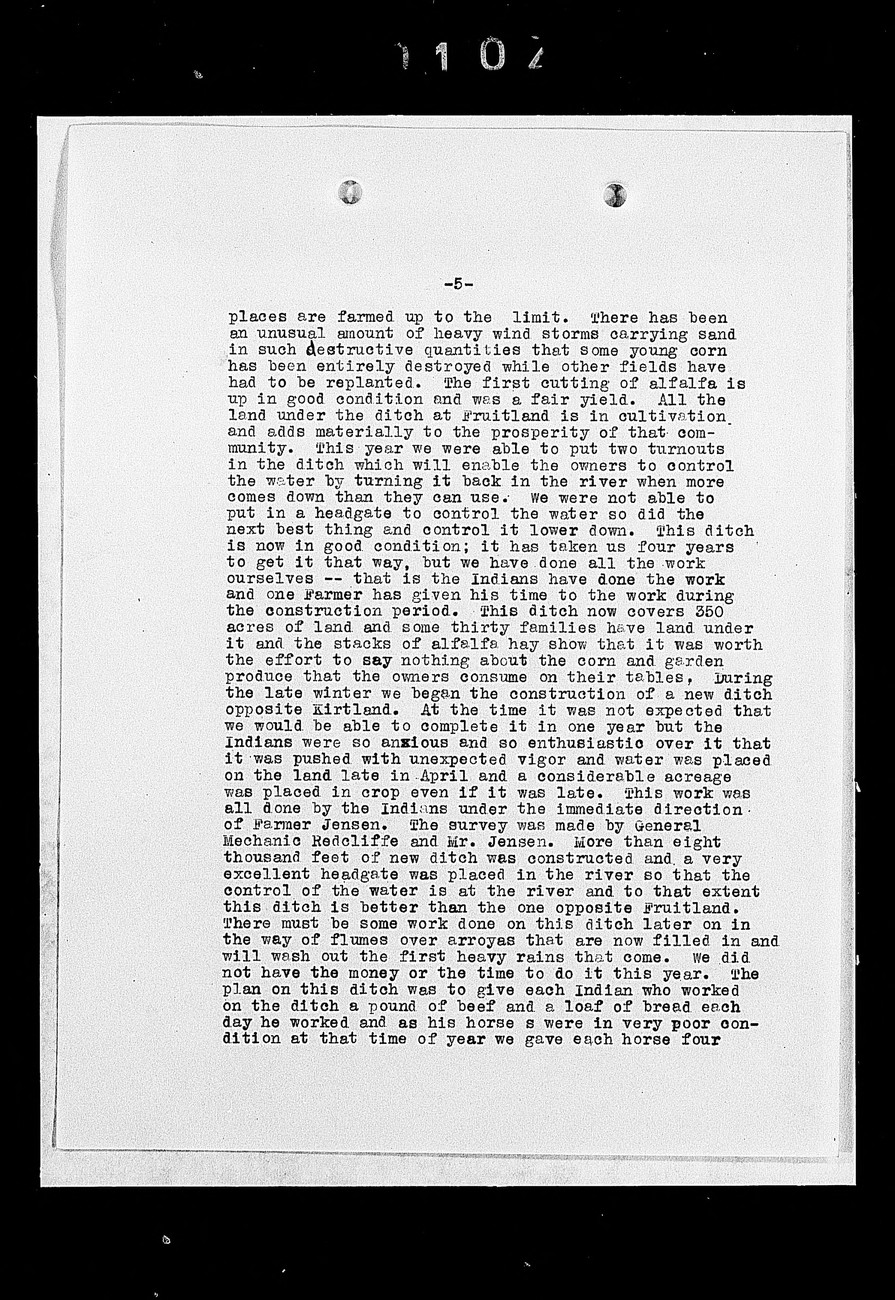 Can you help improve this?
11 of places are farmed up to the limit. There has been an unusual anount of heavy wind storms carrying sand in such destructive quantities that s Ome young corn has been entirely destroyed while other fields have had to be replanted. The first cutting of alfalfa is up in good condition and was a fair yield. All the land under the aitch at Fruitland is in cultivation and adds materially to the prosperity of that com. munity. This year we were able to put two turnouts in the ditch which will enable the owners to control the water by turning it back in the river when more comes down than they can use. We were not able to put in a headgate to control the water so did the next best thing and control it lower down. This ditch is now in good condition; it has taken us four years to get it that way, but we have done all the work ourselves that is the Indians have done the work and one Farmer has given his time to the work during the construction period. This ditch now covers 350 acres of land and s ome thirty families have land under it and the stacks of alfalfa hay show that it was worth the effort to say nothing about the corn and garden produce that the owners consume on their tables, During the late winter we began the construction of a new ditch opposite Kirtland. At the time it was not expected that we would be able to complete it in one year but the Indians were so anxious and so enthusiastic over it that it was pushed with unexpected vigor and water was placed on the land late in April and a considerable acreage was placed in crop even if it was late. This work was all done by the Indians under the immediate direction of Farner Jensen. The survey was made by General Mechanic Redcliffe and Mr. Jensen More than eight thousand feet of new ditch was constructed and a very excellent he adgate was placed in the river so that the control of the water is at the river and to that extent this ditch is better than the one opposite Fruitland There must be some work done on this ditch later on in the way of Plumes over arroyas that are now filled in and will wash out the Pirst heavy rains that come We aid not have the money or the time to do it this ye er. The pl an on this ditch was to give each Indian who worked on the ditch a pound of beef and a loaf of bread each day he worked and as his horse s were in very poor con aiti on at that time of year we gave each horse four searanoramOSET INTERESTORE on