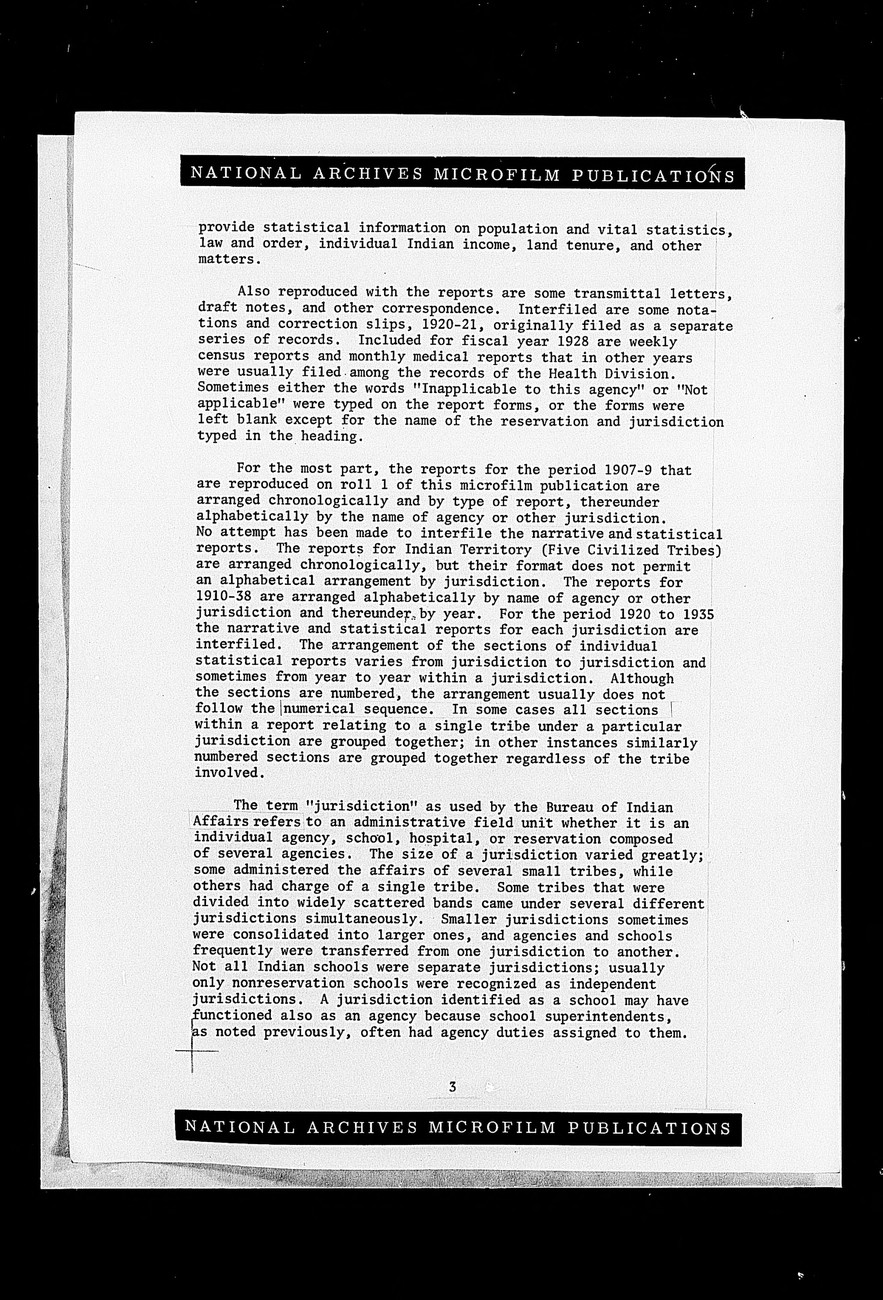 Can you help improve this?
NATIONAL LA RC HIVES SMIC ROFIL M PUBLICATION S provide statistical information on population and vital statistics law and order individual Indian income, land tenure and other matters Also reproduced with the reports are some transmittal letters, draft notes, and other correspondence. Interfiled are some nota. tions and correction slips, 1920- 21, originally filed as a separate series of records Included for fiscal year 1928 are weekly census reports and monthly medical reports that in other years were usually filed among the records of the Health Division Sometimes either the words" Inapplicable to this agency" or" Not applicable" were typed on the report forms, or the forms were left blank except for the name of the reservation and jurisdiction typed in the heading For the most part, the reports for the period 1907- 9 that are reproduced on rol1 1 of this microfilm publication are arranged chronologically and by type of report, thereunder alphabetically by the name of agency or other jurisdiction No attempt has been made to interfile the narrative and statistical reports The reports for Indian Territory( Five Civilized Tribes) are arranged chronologically, but their format does not permit an alphabetical arrangement by jurisdiction. The reports for 1910- 38 are arranged alphabetically by name of agency or other jurisdiction and thereunder, by year. For the period 1920 to 1935 the narrative and statistical reports for each jurisdiction are interfiled. The arrangement of the sections of individual statistical reports varies from jurisdiction to jurisdiction and sometimes from year to year within a jurisdiction. Although the sections are numbered, the arrangement usually does not follow the numerical sequence. In some cases all sections rithin a report relating to a single tribe under a particular jurisdiction are grouped together, in other instances similarly numbered sections are grouped together regardless of the tribe involved The term" jurisdiction" as used by the Bureau of Indian Affairs refers to an administrative field unit whether it is an individual agency, school, hospital, or reservation composed of several agencies The size of a jurisdiction varied greatly: some administered the affairs of several small tribes, while others had charge of a single tribe Some tribes that were divided into widely scattered bands came under several different jurisdictions simultaneously. Smaller jurisdictions sometimes were consolidated into larger ones, and agencies and schools frequently were transferred from one jurisdiction to another Not all Indian schools were separate jurisdictions, usually only nonreservation schools were recognized as independent jurisdictions A jurisdiction identified as a school may have unctioned also as an agency because school superintendents, Is noted previously, often had agency duties assigned to them. N A TIO N AL ARCHIVE SMIC R OF IL MP UBLIC A T I ON S