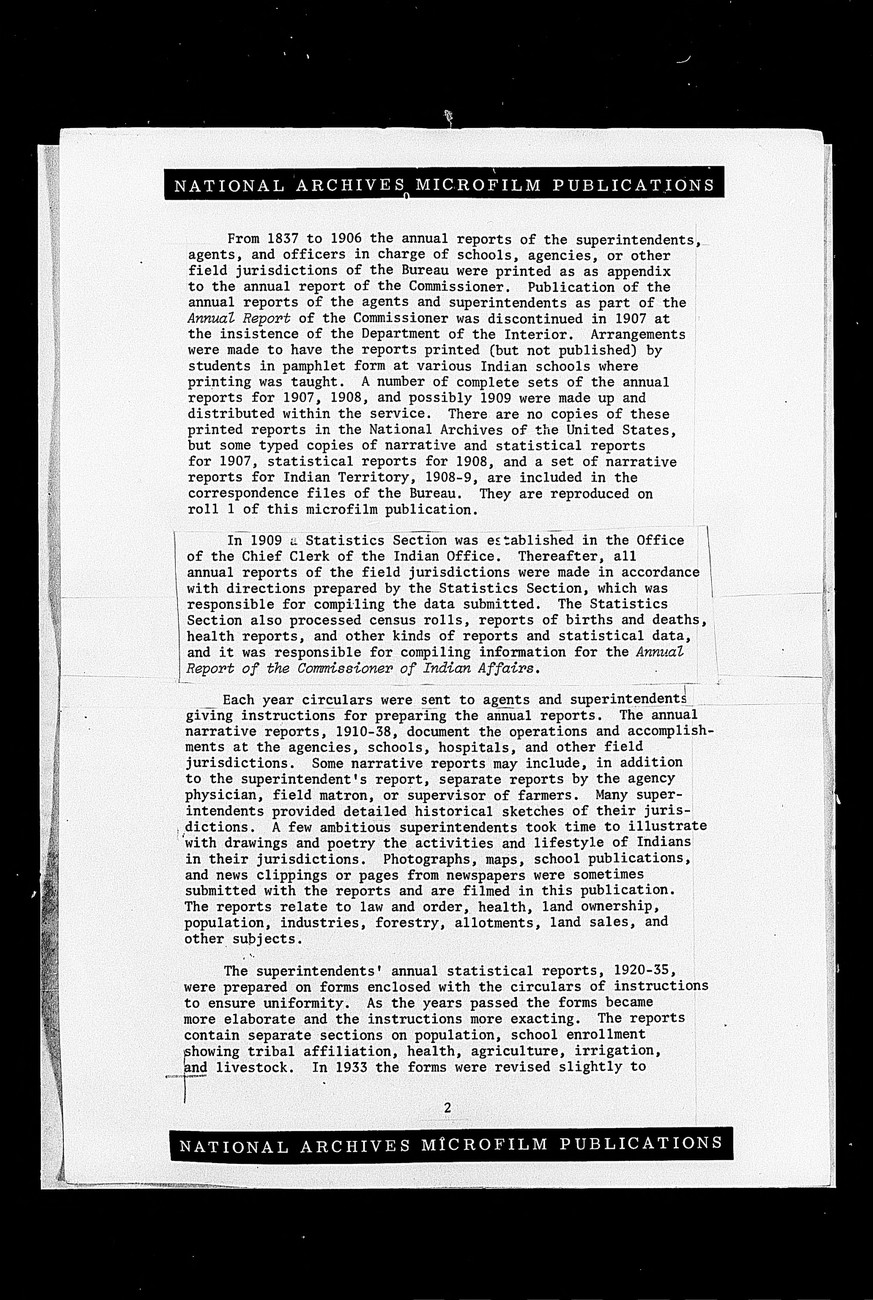 Can you help improve this?
N A TION AL AR C HIV E SMICR OF IL MP U BLICATIONS From 1837 to 1906 the annual reports of the superintendents agents and officers in charge of schools agencies or other field jurisdictions of the Bureau were printed as as appendix to the annual report of the Commissioner Publication of the annual reports of the agents and superintendents as part of the Annual Report of the Commissioner was discontinued in 1907 at the insistence of the Department of the Interior. Arrangements were made to have the reports printed( but not published) by students in pamphlet form at various Indian schools where printing was taught A number of complete sets of the annual reports for 1907, 1908, and possibly 1909 were made up and distributed within the service There are no copies of these printed reports in the National Archives of the United States but some typed copies of narrative and statistical reports for 1907, statistical reports for 1908, and a set of narrative reports for Indian Territory, 1908- 9, are included in the correspondence files of the Bureau They are reproduced on roll 1 of this microfilm publication In 1909 Statistics Section was e ablished in the Office of the Chief Clerk of the Indian Office Thereafter, al1 annual reports of the field jurisdictions were made in accordance with directions prepared by the Statistics Section which was responsible for compiling the data submitted The Statistics Section also processed census rolls reports of births and deaths health reports and other kinds of reports and statistical data and it was responsible for compiling information for the Annual Report of the Commissioner of Indian Affairs Each year circulars were sent to agents and superintendents giving instructions for preparing the annual reports The annual narrative reports, 1910- 38, document the operations and accomplish ments at the agencies schools, hospitals and other field jurisdictions Some narrative reports may include, in addition to the superintendent' s report, separate reports by the agency physician, field matron or supervisor of farmers Many super intendents provided detailed historical sketches of their juris. dictions A few ambitious superintendents took time to illustrate with drawings and poetry the activities and lifestyle of Indians in their jurisdictions Photographs maps school publications and news clippings or pages from newspapers were sometimes submitted with the reports and are filmed in this publication The reports relate to law and order, health, land ownership population industries, forestry, allotments, land sales and other subjects The superintendents annual statistical reports, 1920- 35 were prepared on forms enclosed with the circulars of instructions to ensure uniformity As the years passed the forms became more elaborate and the instructions more exacting The reports contain separate sections on population school enrollment irrigation In 1933 the forms were revised slightly to aha" Retrobe! are sure NATIONAL ARC HIV E SMIC R OF IL M PUBLIC A TION S