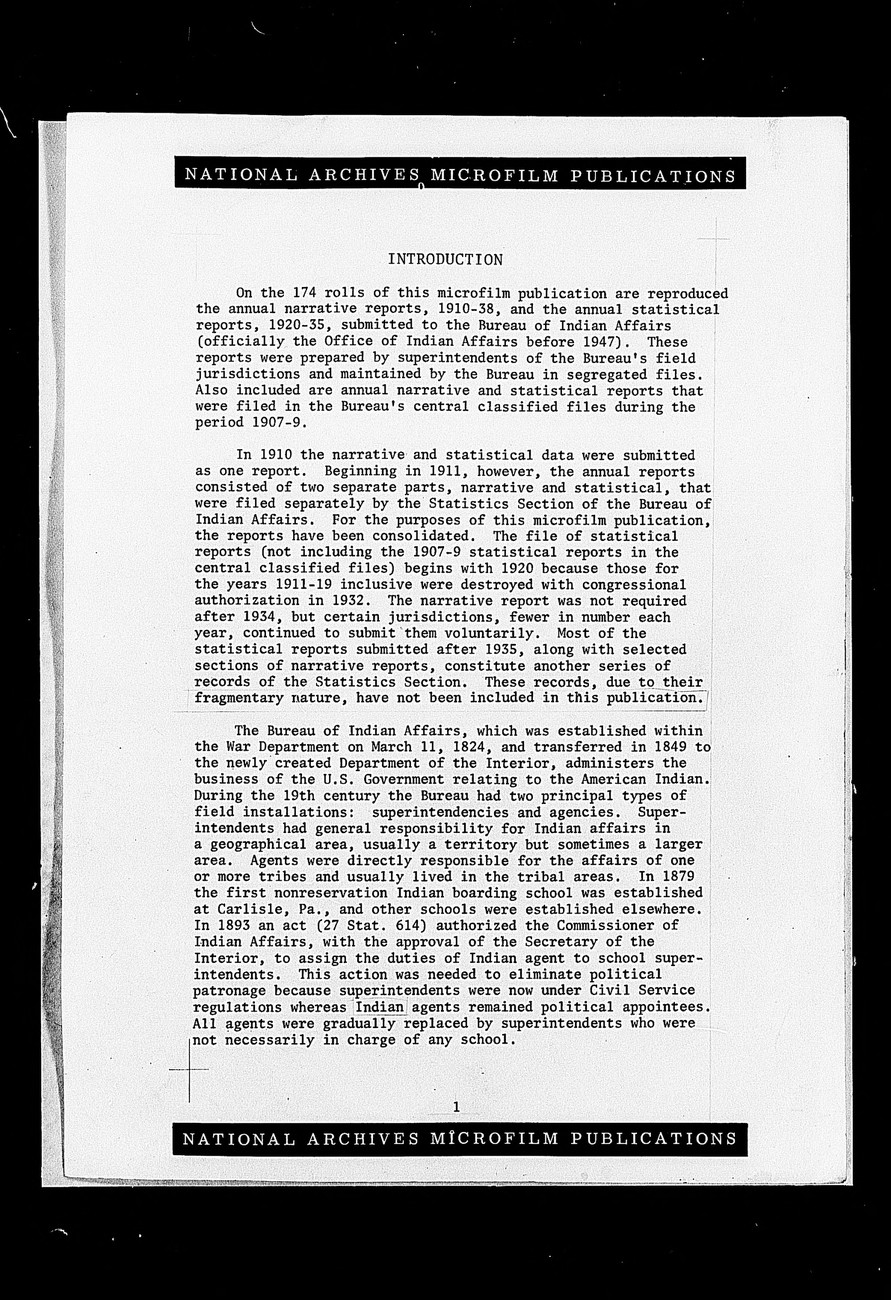 Can you help improve this?
N A TIONAL A R CHIVE SMIC R OF IL M PUBLIC A TIONS INTRODUCTION On the 174 rolls of this microfilm publication are reproduced the annual narrative reports, 1910- 38, and the annual statistical reports, 1920- 35, submitted to the Bureau of Indian Affairs ( officially the Office of Indian Affairs before 1947). These reports were prepared by superintendents of the Bureau' s field jurisdictions and maintained by the Bureau in segregated files Also included are annual narrative and statistical reports that were filed in the Bureau' s central classified files during the period 1907- 9 In 1910 the narrative and statistical data were submitted as one report. Beginning in 1911, however, the annual reports consisted of two separate parts, narrative and statistical, that were filed separately by the Statistics Section of the Bureau of Indian Affairs. For the purposes of this microfilm publication, the reports have been consolidated. The file of statistical reports( not including the 1907- 9 statistical reports in the central classified files) begins with 1920 because those for the years 1911- 19 inclusive were destroyed with congressional authorization in 1932. The narrative report was not required after 1934, but certain jurisdictions, fewer in number each year, continued to submit them voluntaril Most of the statistical reports submitted after 1935, along with selected sections of narrative reports, constitute another series of records of the Statistics Section. These records, due to their fragmentary rature, have not been included in this publication. The Bureau of Indian Affairs, which was established within the War Department on March 11, 1824, and transferred in 1849 to the newly created Department of the Interior, administers the business of the U. S. Government relating to the American Indian During the 19th century the Bureau had two principal types of field installations: superintendencies and agencies. Super. intendents had general responsibility for Indian affairs in a geographical area, usually a territory but sometimes a larger area. Agents were directly responsible for the affairs of one or more tribes and usually lived in the tribal areas. In 1879 the first nonreservation Indian boarding school was established at Carlisle, Pa., and other schools were established elsewhere In 1893 an act( 27 Stat. 614) authorized the Commissioner of Indian Affairs. th the approval of the Secretary of the Interior, to assign the duties of Indian agent to school super intendents. This action was needed to eliminate political patronage because superintendents were now under Civil Service regulations whereas Indian agents remained political appointees All agents were gradually replaced by superintendents who were not necessarily in charge of any school N A TION A LA R CHIVE SMIC R OF IL M PUBLICATIONS